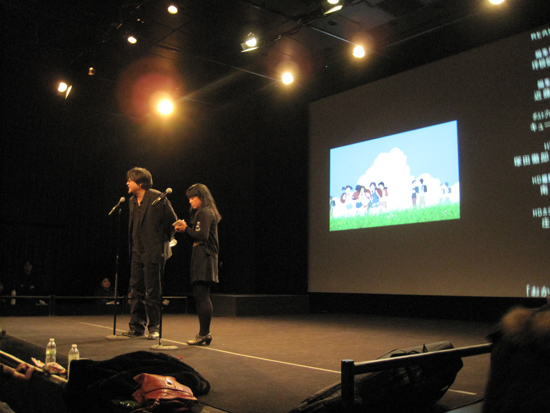 Mamoru Hosoda, director of The Girl Who Leapt Through Time (2006), Summer Wars (2010), and the first two Digimon movie shorts (1999-2000), appeared at the New York International Children’s Film Festival on March 9, 2013 to present his newest animated feature, Wolf Children, and take questions from the audience afterward. As with his two preceding features, Wolf Children, shown in a Japanese-language version with English subtitles, was a big hit with the festival audience and cemented the director’s growing reputation as the preeminent director of theatrical animation in Japan today, the obvious spiritual heir to Hayao Miyazaki, who threatens to retire after each film he makes. Hosoda makes films that are hits with critics and award ceremonies while also attracting large, appreciative audiences the world over.

Like Miyazaki’s work, his films are equally accessible to children, teen and adult audiences, with an emotional depth and command of character that are comparable to the best of Miyazaki and a strong sense of place, with richly designed settings that are often quite breathtaking. One can argue that Wolf Children is the most emotionally mature work yet by Hosoda as it chronicles the efforts of a young widowed mother to raise her two children, a girl, Yuki, and a boy, Ame, whose father was part wolf, while protecting them from possible persecution by human society because of their tendency to revert to wolf form at inopportune moments. It’s one of those rare animated works that focuses on the struggles of a single mother and the process of rearing children under difficult circumstances. FUNimation is distributing the film and will dub it into English with a possible theatrical release later this year. 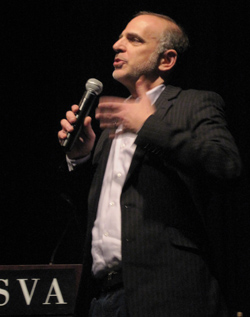 At the Q&A after the first screening, Mr. Hosoda took questions from festival director Eric Beckman and members of the audience. Since I wasn’t in a good position to make a useable recording, I transcribed most of it by hand with some of it paraphrased based on my notes. My complete interview with Mr. Hosoda, conducted two days after the screening, will follow.

Eric Beckman opened the Q&A by asking why Hosoda had made that rare film to show the process of a mother raising a child.

A: So kids can appreciate how hard it is to raise a child. Lots of animation shows the child’s perspective. This is from the mother’s perspective and is very rare. 13 years of raising a child is impossible in live-action, unless you take 13 years to make it.

An audience member asked about the symbolism of the wolf in Japanese mythology.

A: Wolves do play a big part in Japanese culture. “Okami” [the Japanese word for wolf] means “big god.” Some shrines have statues of wolves. In picture books wolves are solitary and portrayed as bad guys, so you have that impression as well. Kids who read picture books see that wolves are caught and punished so I’m sure a lot of kids feel for the wolf.

Another audience member pointed out Hosoda’s “naturalistic, soft family take on loud-scale stories” and asked: “What draws you to that approach?”

A: Summer Wars was more action-oriented. It’s rare to see a family drama in the action genre. This one’s more naturalistic. With Summer Wars, I showed the relationship of the family bond. With this film, I zoom in closer to mother and child. How hard it is to raise a child and show it in a simpler way. Some people think it’s hard to believe the same person directed both Summer Wars and Wolf Children. 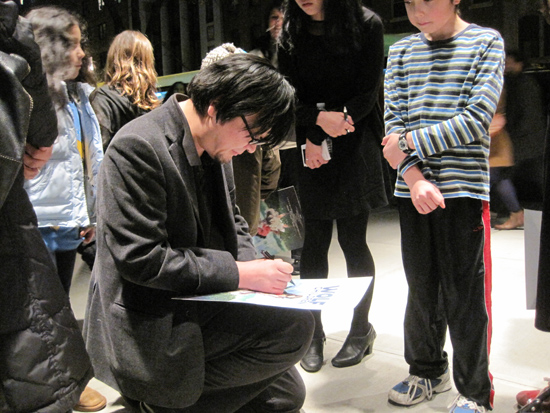 An audience member asked about his inspiration for the film. The translator said the film was focused on raising a child. She said that Hosoda thought about his mother a lot and how his wife wanted a child. After the movie, a baby was born to the couple – he’s five months now.

A question was asked about specific photorealistic backgrounds in the film, but the answer seemed to be a general one about the backgrounds throughout the film.

Q: Did you grow up in the city or country?

A: The background is based on the Toyama countryside that I grew up in till the age of 18. In making a film about a mom raising kids, I based it on my upbringing and childhood.

A child asked “What’s your favorite part of the movie?”

A: I have a lot of favorite scenes. One would be in the middle moving through the snow down the hill.

An adolescent viewer asked “What directors, authors, writers, artists, and painters inspired you?” 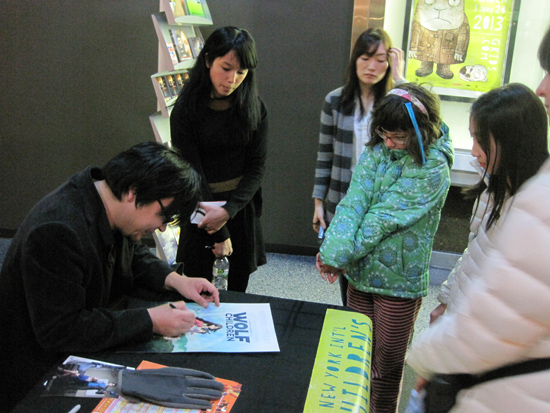 A: So many that I’m inspired by. 150 favorite directors. Way too many. I really like Disney’s Beauty and the Beast.

Q: Was the movie based on a story?

A: I wrote the screenplay and directed it. I remembered all of my childhood memories growing up with my mom.

After the screening, with time before the next one was to start, Hosoda went out onto 23rd Street in front of the theater as festival assistants passed out posters to the crowd and a line soon formed for Hosoda to sign the posters. He took the time to create a little drawing on each of the posters. After a while, the festival staff moved him to a table in the foyer of the theater where he could draw more comfortably and with better light and the fans, from the very young to the middle-aged, waited on line patiently as he took care of each of them over a period of two hours.

Two days later, on March 11, 2013, Mr. Hosoda sat down for an exclusive interview with Otaku USA and answered questions about the film and about his earlier works. Click here to continue reading.