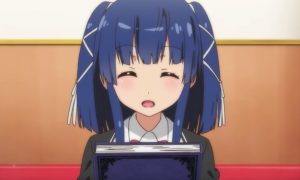 The saga of Maerchen Maedchen‘s unaired episodes dates back to March of last year, when episodes 9 and 10 were pushed back for two weeks to improve the quality of animation. That meant the last two episodes had to be removed from the original broadcast schedule, with plans to release them later in one form or another. Fast forward to January of 2019 and not only are they not here yet, they’ve been hit with another delay.

The previous plan was to release episodes 11 and 12 sometime in December, followed by their inclusion on the sixth and final Blu-ray volume that’s set to launch in Japan on January 30. According to the official website, that’s not going to happen, and the Blu-ray’s release has been moved back to May 30, 2019.

It’s unclear whether or not those final eps will surface before the new Blu-ray launch date. In the meantime, fans of the series will just have to keep waiting for a proper conclusion.

Crunchyroll streamed the first 10 episodes of Maerchen Maedchen as they aired. Here’s the official synopsis:

This is a story about girls (called “Maedchen”) who are selected by “Origin”. They attend school of witchcraft located all over the world to wield their magic and become first-rate “Origin Masters”. Their goal is to win at the annual Hexennacht competition, where representatives of each school compete in their abilities to wield their magic. The winner gets to have one wish magically granted. Due to lack of members, Japan might not be able to attend the annual competition this year. but things start to change when one day Shizuka Tsuchimikado, the leader of Japan meets Hazuki Kagimura.

An Unlikely Tutor Rises Up in the We Never Learn Manga
In the Kingdom Hearts Hotel Room, Keyblades Open Your Door