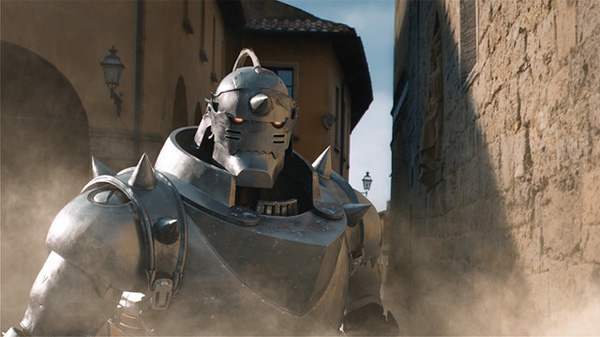 Since it was announced last year, we’ve been getting drips and drops of details about the upcoming live-action Fullmetal Alchemist film. Most recently, we got a wide shot of the film’s Alphonse, but now we’ve got our first closeup of Edward’s full-metal, full-CG bro.

Alphonse will be computer-generated, and according to an article that accompanied the release of the shot, he’ll employ some CG techniques used for the first time in the Japanese film industry, though it was left unclear exactly what those techniques may be.

Director Fumihiko Sori commented that when he saw the results of the CG, he thought, “okay, this’ll work, we can do [Fullmetal Alchemist] in live-action.”

He also commented that he “doesn’t want to let anyone down,” and “respect the qualities of the original work.”

Along with the Alphonse close-up, the release date for the film was announced: it’ll be released in Japan December 1.

As always, you can expect a review from us then.