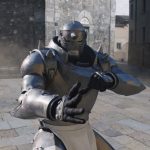 If you’ve been holding out for a streaming release of the live-action Fullmetal Alchemist movie, the wait is almost over. Netflix is preparing to add and remove a bunch of titles in February, and one of the new additions is Fumihiko Sori’s adaptation of Hiromu Arakawa’s fan-favorite manga.

According to the latest update, you’ll be able to check out Fullmetal Alchemist at home when it makes its English Netflix debut on February 19.