As a teenager, one of the first things I loved about romance manga was that characters expressed anxiety about love and sex … not like in mainstream Western media, where sex seemed like just something beautiful people just did, and if you didn’t do it, there was something wrong. I later realized that, of course, mainstream manga had its clichés and harmful ideas too—but there are no clichés in Nagata Kabi’s manga, which begins in moment of truth everyone is taught to obsess over, as the main character (Kabi herself) prepares to lose her virginity at age 28 to a lesbian prostitute in a hotel room. (“I always see this happen in doujinshi. I’m really doing it.”) Sweeping back in time, My Lesbian Experience with Loneliness shows how Kabi got to this point, from an 18-year-old college dropout with an eating disorder and a cutting problem, to every painful step on her path to self-discovery and love.

Originally published on the art site pixiv, Kabi’s manga combines wonderful, flowing, two-tone artwork with the unsparing honesty of the greatest autobiographical comics. Caught in a quarter-life crisis, working dead-end jobs while living with her parents, Kabi feels suffocated by family pressure, and the dream of becoming “a shining adult” feels impossibly far away. Isolated and 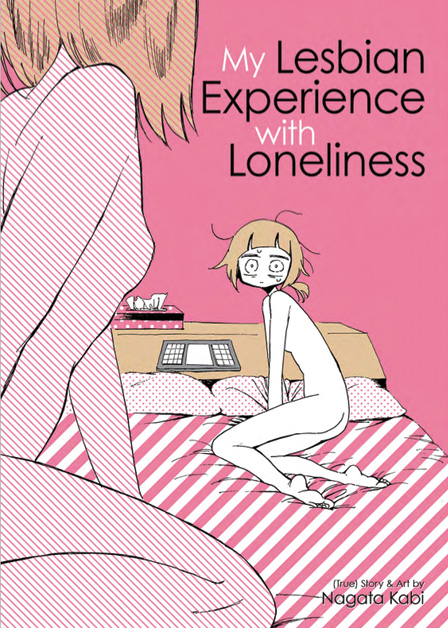 suffering, possibly asexual, she doesn’t even dare to think about love or relationships … but gradually she feels a desire to be touched, a desire for affection or something more. Kabi guides the reader through her thought process as she slowly, slowly deals with her depression and finds a way to happiness, while simultaneously trying to become a professional mangaka. (“Because I couldn’t love myself, I’d always treat myself and my accomplishments like they were crap. And then I let go of everything else, like connecting with people through work, making friends, having fun with people…”)

The title is, of course, My Lesbian Experience with Loneliness, but although Kabi is definitely queer (and talks about how she realized this), this manga doesn’t really deal much with LGBT issues. Depression, gender issues, sexual repression, Kabi has so much on her plate that homophobia (internalized or otherwise) barely registers. This is a manga about mental health and growing up and losing your virginity, incredibly raw and depressing subject matter … and yet (spoiler) it’s not ultimately a sad story, but very uplifting and hopeful, as Kabi’s long night’s journey eventually comes to daybreak, and she discovers that having sex isn’t the end, only the beginning of more discoveries. Beautifully drawn, honest and voyeuristic and sad and educational all at once (and occasionally funny), it’s one of the best autobiographical comics ever; and, as far as autobiographical comics about sleeping with prostitutes, it’s definitely a thousand times better than Chester Brown’s Paying For It. Recommended.