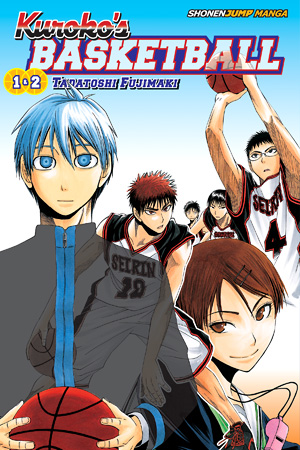 A lot of people know what it’s like to feel invisible, and they usually don’t like it. Tetsuya Kuroko feels invisible all the time and he’s fine with it—it helps him play a mean game of basketball.

The new high school students are signing up for clubs, and Taiga Kagami joins basketball. Even though he’s only a first year high school student, he’s already six foot three and 181 pounds. He looks like the dream basketball player, and he pretty much already thinks he is.

And then there’s Kuroko, who also signed up for basketball. He’s five foot six and 126 pounds, which already has other people prejudiced against his basketball skills. He’s so dull-eyed and quiet, too—people will sit at a table to eat and demand to know why he sat there to join them, only for him to explain he was there first. People are automatically that oblivious to him.

There’s a twist, though. Kuroko was part of his middle school’s basketball club, where five amazing players were known as the “miracle generation.” After middle school, they all split off and went to different high schools. Kuroko was the phantom sixth man, or so they say.

But he soon has an opportunity to show his skills. Because no one is aware of him, he’s able to do sweet moves on the court and help out his teammates. Invisible or not, he knows what he’s doing. (And he also tells Taiga that he, Taiga, would not be able to beat the miracle generation, no matter how good Taiga thinks he is.) The two become unlikely helpers as Taiga tries to improve his game.

Kuroko’s Basketball works with its quirky characters, but because a lot of the story does take place on the court, it’s probably going to be of the most interest to people who are fans of sports manga (or sports stories in general). There are many super shonen-esque, rapid-line-drawing scenes of players rushing with the basketball and intense talk of strategy to beat the other team. The series has been a mega-bestseller in Japan, moving millions of copies. The anime first become available to watch on Crunchyroll, and now VIZ Media is releasing the manga series as a double package, with two manga volumes per book. A fun buy for otaku who want some sports in their reading.