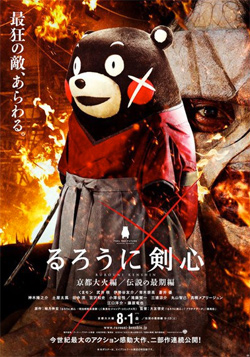 We reported recently most of Japan’s local mascots, aimed at promoting prefectures and towns throughout the country, aren’t really worth their cost, causing the Ministry of Finance to make some serious cuts in mascot budgeting.

One exception might be Kumamon, the lovable bear created to promote Kumamoto prefecture located on Japan’s southern island Kyushu. If you live in Japan you see Kumamon all over the place, with Kumamon merchandise and advertisements all over the darn place.

Now Kumamon’s involved in promoting the new Rurouni Kenshin films, set to hit in August and September, respectively (we’ll have reviews, natch!). Kumamon appeared at a press conference for the films and showed off his prowess with a sword – check it out.