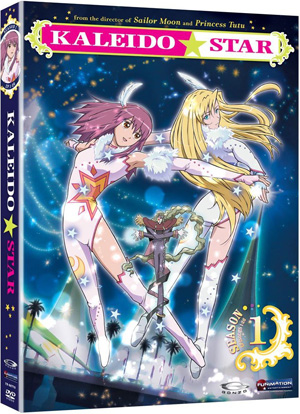 You could say that Sora has her eyes on the prize. She doesn’t want a normal life: she wants to be a star. Specifically, she wants to be an acrobatic performer at the renowned Kaleido Stage in California.

Since Sora lives in Japan, she hops a flight to the United States, telling her parents that if she fails at this, she’ll give up her dream for stardom. However, she doesn’t believe she’ll fail, and is devastated when she’s late for auditions and therefore can’t be part of the act.

It looks as if it’s all over for Sora… then one of the girls in the show gets hurt. And who is there to replace her? Yes, because this is an anime and not the real world, the untested Sora is put in a bunny suit and sent out on stage.

After proving she can handle this, she becomes a member of the Kaleido Stage cast. If she thinks things will be easy now, she’s sorely mistaken, because many other cast members are envious of how easily she got in. She didn’t even have to audition! Now it’s up to Sora to both push herself to be her best on stage and make friends with the cold cast members. In the midst of this, a spirit (or “ghost” as Sora bluntly calls it) starts showing up and harassing the girl. He’s known as Fool and is the Spirit of the Stage, seen only by those who are meant to do amazing things on the stage. So, even if no one else believes in her, Fool knows that there’s something going on with this kid.

One thing that’s bound to be pointed out in any Kaleido Star review is the fact it’s from Junichi Sato, the same director behind Sailor Moon and Princess Tutu. Sailor Moon is one of the most famous anime series out there, known to people who know nothing else about anime. And I continue to maintain that Princess Tutu is a great series that just happens to have an unfortunate title that keeps more people from seeing it. Kaleido Star has some magical happenings (like the Spirit of the Stage) but not to the same extent as Sailor Moon and Princess Tutu.

So far Kaleido Star is a cute series, balancing both comedy and drama. Sora is perky and likable, even if her way of getting hired is a tad unrealistic. FUNimation has released season one (26 episodes) as a collection. Sora is becoming a star at Kaleido Stage, but will she be a star for anime viewers?

Highschool of the Dead Now Available on Hulu
Itsuwaribito vol. 1