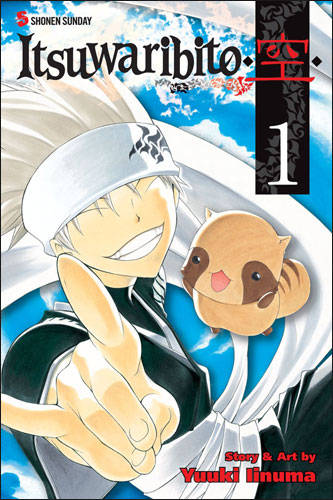 Utsuho is a dirty rotten liar. It’s tough getting the truth out of him, since he prefers lies and fabrications to honesty. But that doesn’t have to be a bad thing.

He used to be a very honest kid. One day some people came and asked him all sorts of questions about his house. He answered the questions, not realizing this might be unwise. It turned out the people were bandits, and they broke into his house and killed everyone. Utsuho was the only survivor and had to witness the results of the bloodbath. Since then, he has detested telling the truth. In his mind, telling the truth can only lead to tragedy.

These days he lives in a village for orphans where there are only six adults running the place. A monk affectionately known as “Gramps” is one of the adults and he reminds Utsuho time and again that honesty is the best policy. However, one of the most trusted boys in the village turns out to be a traitor, and he leads bandits in. Everyone is killed but Utsuho and Gramps, and Gramps is in pretty bad shape. Utsuho fights back, and, with cunning and lies, defeats the bandits.

And then he decides to go out into the world. In honor of Gramps, who ultimately didn’t survive his wounds, the trouble-making liar wants to save everyone he can. And he’ll do it by lying.

The first person Utsuho helps isn’t a person at all. It’s a talking tanuki whose mother has been captured by a poacher. Utsuho takes the poacher on, once more using cunning and lies. Even if lies aren’t pleasant, the poacher is clearly the worse character and gets no sympathy from the reader. Afterward, the talking tanuki ends up journeying with Utsuho. It looks as if our liar has gotten himself a cute little sidekick! From here we have a series of short tales as different people are saved in different situations.

In the very beginning of the manga, Utsuho is not a sympathetic character. He lies so easily it’s shocking. His lying becomes understandable after we learn about his past, and he becomes increasingly more sympathetic as he journeys around to save people’s lives. The fact he does this by lying is the paradox and backbone of the series. Lying isn’t supposed to be a good thing, but Utsuho makes himself into a hero by using dishonest tactics. All this makes Itsuwaribito an interesting read… but I wouldn’t go so far as to recommend it as a way to live your life.

Kaleido Star: Season One
Gantz Subbed at Viz Cinema for One Night Only