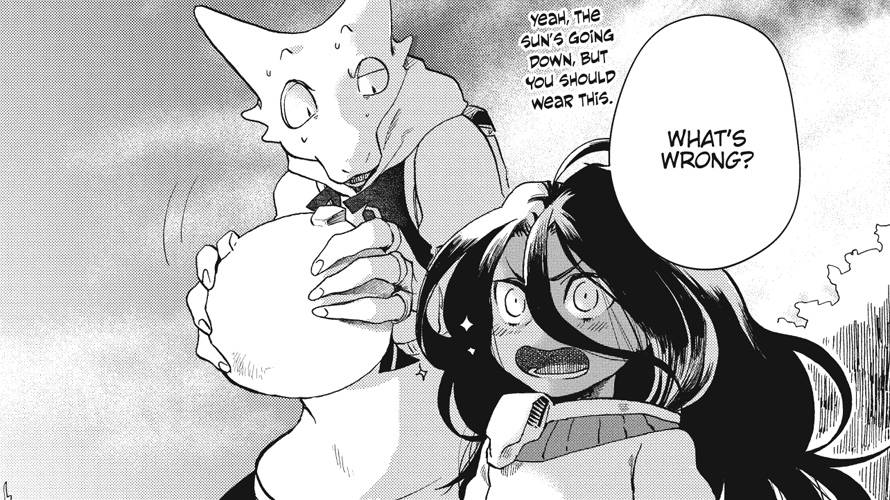 With likable characters and a story that’s cute from out of the gate, Juana and the Dragonewt’s Seven Kingdoms gets off to a promising start, but staggers a little in the execution. In a far future, humans, also known as Muernandes, have been extinct for ages. Replacing them are the dragon-like Guardunes, or Dragonewts. Nid, one of the Dragonewts, makes his living digging up ancient human artifacts and selling them to collectors. One day he discovers an egg in the ruins. To Nid’s surprise, the egg hatches and out comes a creature he’s never seen before: a little human girl named Juana who only speaks Spanish. Nid and his friend Zeddan, an antiques dealer, ponder what to do with Juana as the girl starts to draw unwanted attention. Worried for her safety, Nid sets out to find a home for Juana with others of her kind.

Hopefully the characters’ personalities will grow in dimension and depth as the book unfolds. Nid isn’t well defined at the outset of the book. He’s given a couple of personality traits, like being impulsive and having some ill-defined issues with his family, but these are left largely unexplored in the first volume. Nid is also the source of ridicule by the herbivore majority for being a carnivore.

The promise of the story is slightly undercut by the uneven quality of the artwork. The characters, especially the Dragonewts, are ill defined and anatomically awkward. There’s a vagueness to their designs that leaves the impression the artist wasn’t sure how they should look or didn’t want to put effort into designing a ton of different dragon people. They have horns and jagged mouths with indeterminate teeth, often drawn as an outline with no distinction between teeth and lips. Some of the Dragonewts look like loong (Eastern dragons) while others have hair and, inexplicably, breasts. The overall lack of texture and detail detracts from the book despite its charming story and interesting premise. Juana, the sole human, on the other hand, is adorable and well drawn. She remains consistent and recognizable while even the main Dragonewt, Nid, is often hard to pick out of a crowd.

As Nid and Juana explore their world, the series presents opportunities for lots of stories, and with luck not all of them will be as cliché as the evil circus that wants Jauna as an exhibit by the end of Volume 1. Ideally, Juana will wander into the territory of fantasy manga like Kino’s Journey, taking time to explore the cultures and peoples of the Seven Kingdoms.