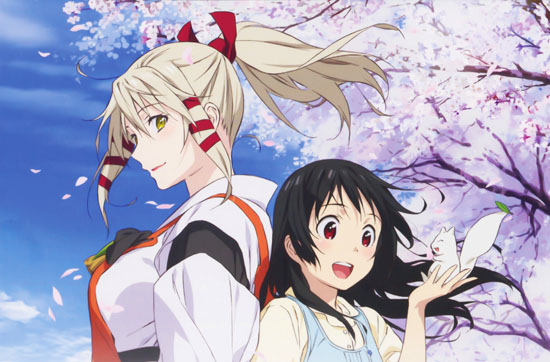 I’ve got a bit of a soft spot for anime that focus on the unique personality of real-life settings—shows like Tsuritama (set on the island of Enoshima), The Eccentric Family (set in Kyoto), and Durarara (set in Ikebukuro in Tokyo). Inari, Konkon, Koi Iroha (2014) not only uses a real setting, but ties its characters directly to the location. Set in and around the Fushimi Inari shrine in eastern Kyoto (one of my favorite spots in the city), it’s a charming mix of Japanese mythology and coming-of-age themes.

In case you doubted me, our main character is literally named after the shrine: Inari Fushimi. She’s got a massive, embarrassing crush on her middle school classmate Tanbabashi, who, naturally, hardly even knows she exists. Unfortunately for Inari, she’s also clumsy and awkward, and to top it off, Tanbabashi might have the hots for a much prettier girl. 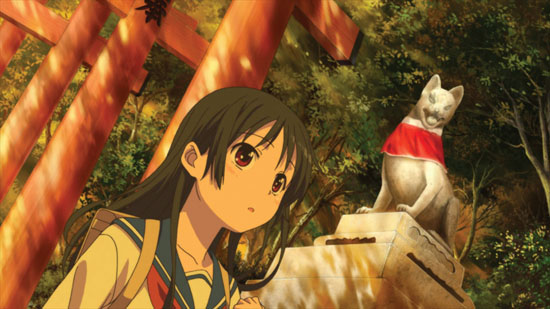 Inari gets her shot to turn things around when Uka-no-Mitama-no-Kami, the god of the Fushimi Inari shrine (based on a real deity in Shinto mythology), responds to her cry for help and grants her the ability to transform into any other person. Nothing’s ever quite so simple, though, and if anybody can screw up a divine power, it’s Inari. Over 10 episodes, Inari slowly finds her confidence through exploring her newfound power while deepening an odd friendship with her new god companion.

You’d be forgiven for calling Inari Konkon a shojo, as it has many of the hallmarks of the genre of schoolgirl romance that we often associate with the girls’ comics demographic. Strangely enough, however, the manga ran in the seinen magazine Young Ace, home of (among other things) the Panty & Stocking with Garterbelt adaptation. It’s hard to say who the series is targeted at, since demographic labels can be tricky, but it’s entirely devoid of exploitative, male-targeted fanservice, so if you’re looking for shojo-style mix of romance, drama, and comedy, you could do far worse. 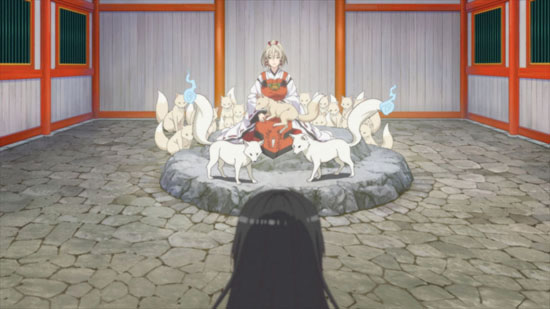 Though Inari is basically a magical girl, right down to the transformation sequence, her power is closer to old-school magical girls than the post-Sailor Moon generation of monster-fighting young women. Her power allows her to say things she wouldn’t otherwise be willing to say, to see the hidden sides of people, and, importantly, to empathize with other people’s lives. In other words, it enables more meaningful relationships rather than more powerful attacks. This forms the series’ core strength: an airy exploration of youth and friendship that has its moments of emotional darkness but never descends into melodrama.

In one early scene, Inari visits Tanbabashi’s house under the guise of one of his friends, but once the comedy hijinks are over she comes away with a revelation about his close relationship with his family, and loves him all the more. Impersonating one of her friends offers an opportunity to mend a poisonous relationship between the pretty, popular Sumizome and overweight, nerdy Maru. As with any good fantasy or science fiction story, the unrealistic elements are merely spotlights trained on universal human experiences. 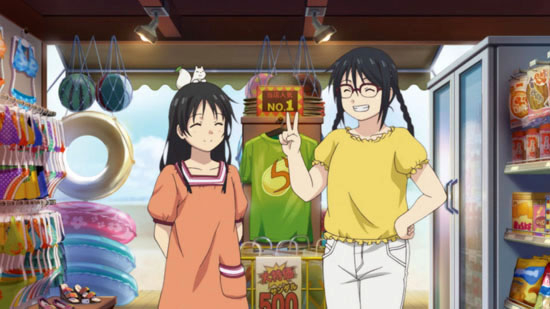 Speaking of which, Uka is a very interesting case. While she and the rest of the godly denizens of the “Celestial Plains” mostly exemplify anime’s tendency to caricature its own country’s religions, her individual story merges self-deprecating otaku comedy with surprisingly heartfelt metaphors for adulthood. Uka is an ancient, powerful god (both in-show and in real mythology) who has yet to be married off, in part because she insists on escaping into “otome” dating sim games where beautiful, two-dimensional men vie for her affection. She lives vicariously through Inari’s youthful romantic escapades, but remains hamstrung by her responsibilities as a god. It’s more than a little like being an adult in the real world, constrained by work, family, and unreasonable expectations, while yearning for the simplicity of youth—or mortality in this case.

It’s no surprise that the series composition comes courtesy of Touko Machida, a veteran screenwriter who’s had her hands in lots of other shows focusing on both comedic and dramatic relationships between young women, including The Idolmaster, Wake Up Girls, and Lucky Star. Unfortunately the ending falls victim to the same problem as Machida’s Allison & Lillia, in that it attempts high drama but fails to establish high stakes. I suspect in both series the original work (a light novel series in Allison & Lillia’s case) is to blame. At least Inari Konkon as a whole is more about watching the slow burn of Inari and Uka’s relationships than it is about big life-or-death conflicts, so the core emotional content remains strong. 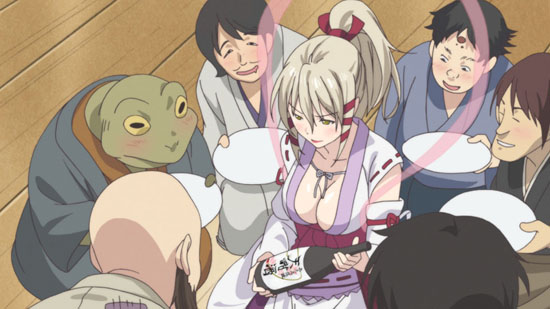 It helps that the rest of the cast isn’t half bad either. Inari’s friends get their share of development, and it turns out that Inari isn’t the only one with issues. Maru is a fujoshi who struggles with social anxiety and Sumizome, despite seeming like she has it all put together, is awkward and lonely too. Plus, there’s no cutesy posing for the implied male viewer, and their interactions feel like a genuine depiction of teenage girls—a nice consequence of women writing both the original manga and the anime screenplay. Meanwhile, Inari’s surly older brother Touka has a pretty funny obsession with the supernatural, and his slowly developing feelings for Uka keep the show’s love polygon fairly complex and interesting. Unfortunately, Inari Konkon adapts only the first half of the 10-volume manga, so it doesn’t pay off any of its romantic plots, but hey, I’m willing to give it credit for maintaining three different ones, including the aforementioned two PLUS a subtle, respectful, and hopelessly endearing lesbian subplot.

The one area where Inari Konkon shows its seinen hand is in the character designs, which lean more toward cute girls than cute boys. Still, there’s a character with a heavier body type who gets treated as more than throwaway comic relief, and that’s something to be commended. The comedy scenes benefit greatly from the interplay between the girls’ varied personalities and a tendency for manic comedic exaggeration. 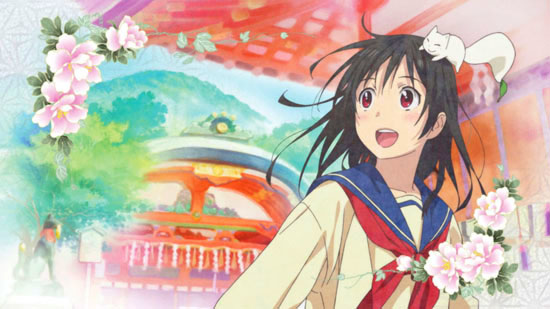 As it winds its way through the red torii gates of the massive plot of land that is the Fushimi Inari shrine, Inari Konkon manages to capture the enigmatic beauty of its location while simultaneously telling a subtle story of a young girl building relationships, both friendly and romantic. It’s tantalizingly short and fails to fully develop most of its subplots, but it’s such a serene combination of the spiritual and the mundane, with such a genuine, likable cast, that I couldn’t help but enjoy it.

Squid Girl Manga to Conclude in Next Volume
[Review] Steins;Gate