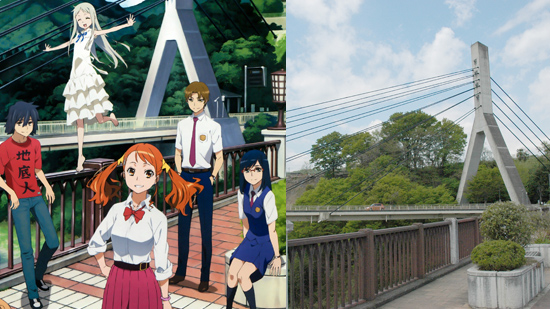 Chichibu, Saitama, has seen otaku flow in since being used in anohana.

If you’ve been following us for a while, you know we’re kind of obsessed with the idea of the otaku pilgrimage, where anime fans go to the real-life settings of their favorite series.

Otaku pilgrimages are not only fun, they’ve been a serious economic boon for small Japanese cities that don’t otherwise get a lot of tourism.

Publisher Kadokawa has seen the potential of getting in on the pilgrimage game, and has announced its intentions to create an 88-stop anime tour for foreign tourists.

Part of the idea is for tourists to expand beyond places like Tokyo and Osaka and go check out local regions. Some examples might include visiting Kamiichi, the setting of Mamoru Hosoda’s film Wolf Children, or Asaguchi, where a shrine that inspired the one from Tenchi Muyo is located.

Of course, with tons of anime set in Tokyo, it’s possible to do plenty of pilgrimaging in the capital too.

What anime location would you like to check out?