At first glance, Interviews with Monster Girls—the 2017 winter anime adaptation of the seinen manga written by Petos, with animation by A-1 Pictures—looks it will be something of a spiritual successor to Monster Musume: Everyday Life with Monster Girls. In Petos’s world, monsters are real, but they’re nothing like the way we see them in books and movies. These demi-humans, or just demis, are actually rare human mutations, and the public has gotten quite accustomed to their existence to the point where they can attend/teach high school alongside normal humans.

Our cast is a diverse array of adorable demis: Hikari Takanashi is a vampire with a very supportive family. She doesn’t have a dark side (and she doesn’t glitter in the sunlight, thank God!), but she does have a lot of energy and confidence. Yuki Kusakabe is a yuki-onna with a huge fear of freezing her own classmates, so she tends to shy away from them, thus making her look emotionally distant in the eyes of her peers. Kyoko Machi is a dullahan who normally cradles her head in her hands; she’s a shy girl, but she’s pretty comfortable with her genetic nature, though you could probably tell how she’s feeling based on the ghostly flame erupting from her neck. Finally, there’s Sakie Satou, a math teacher whose nature as a succubus drives her to isolate herself and hide every last one of her sultry attributes, lest she drive the men around her into a lustful frenzy.

Interviews with Monster Girls has all the elements of a club-centered anime: lighthearted comedy, a down-to-earth setting, cute interactions, and an upbeat atmosphere that would be pretty easy to find anywhere else. Through each girl interacting and chatting with Tetsuo Takahashi—a massive bear of a man who sits down with each of these girls one on one, asking them questions about themselves and, more importantly, the origins of their unique attributes—we separate fact from fiction (Who knew dullahans relied on wormhole physics?) and quickly learn how human these “monsters” actually are. But the anime quickly goes beyond this basic setup and offers up a unique dramedy about dealing with anxiety, making friends, learning how to be comfortable in your own skin, and simply trying to survive everything high school can throw at you. It’s one thing to being a victim of murmurs and gossip in high school, where every little thing that makes you stand out makes for good teasing material; now you have this unlikely genetic makeup that brings a whole new group of challenges to the table.

These genetic circumstances, handicaps, or otherwise noticeable differences are responsible for life’s meanness toward the demis; Machi can’t make friends easily no matter how friendly she is, Yuki ends up being a victim of merciless gossip, and Satou-sensei meticulously forms her life around her uncontrollable abilities. All of these movements are played completely straight with any hint of self-awareness and are bound to resonate with anyone who has ever been treated unfairly because of his or her differences. Takahashi has a keen awareness of how complicated students can be and knows exactly how to interact with folks dealing with personal problems. And each girl has a completely different outlook on both everyday high school life and being a demi in general, but they still manage to form a tightly knit group of friends with each other. I also have to give points to the attention to detail this show has when it comes to Machi in particular. She’s clearly done a bang-up job at overcoming the shortcomings of not having her head attached to her neck, and the animation on how she manipulates her head while its in her hands and chatting with others is wonderfully believable as opposed to cartoonish.

Despite its harem-looking setup, Interviews with Monster Girls doesn’t seem to be interested in making anyone a romantic target. Granted, Takahashi-sensei, albeit unwittingly, enables the affections of these girls with his earnest attention and empathy, but fortunately, the show doesn’t head down any path more questionable than, say, an innocent shopping trip. In fact, the show possesses a rare mutation of its own by having the adults actually acting like responsible adults, especially Takahashi with his neutral but caring attitude. Yes, there appears to be some mutual attraction between Takahashi-sensei and Satou-sensei, but neither teacher lets this get in the way of their work. It’s kind of fascinating: We’re so used to seeing adults be bumbling weirdo goofballs that seeing the likes of Takahashi and Satou gives us all a breath of fresh air.

So in these regards, Interviews with Monster Girls, currently available for streaming on Crunchyroll, is the antithesis of Monster Musume; whereas the former series was a harem rom-com, the latter only looks like a harem rom-com, and it has a more mature take on fitting in and being happy with yourself when you’re just a bit outside the norm, rather than just engaging in extreme physical slapstick and fanservice, and it pulls this atmosphere off with a lot of charm that is certain to appeal to a lot of kids. It might sound ridiculous to say, but I’m not sure I can say I saw any monsters in this show, given that the monster girls we’ve seen here are amazingly human. 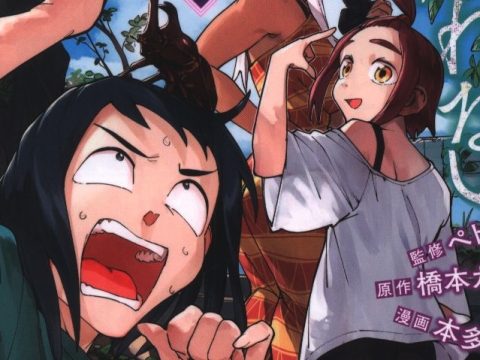