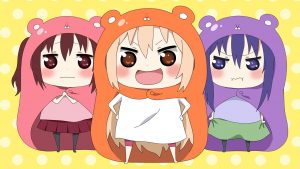 As was the case with the original Himouto! Umaru-chan manga, which ended in 2017, Sankaku Head‘s sequel is about to follow suit. Himouto! Umaru-chan G kicked off its run in the 53rd 2017 issue of Shueisha’s Weekly Young Jump magazine, and the final chapter is now scheduled to close things off in this year’s 20th issue.

The issue goes on sale in Japan next Thursday, April 19.