Rika may or may not be the reincarnation of the deity Oyashiro-sama, but if she is, it doesn’t save her from a gruesome murder. At the beginning, she asks us, the reader, who will kill her.

In a continuation from the story started in the first volume of the Arc, Akasaka is a police officer from Tokyo who is in Hinamizawa to see if anyone in the village has kidnapped the construction minister’s grandson.  This turns out to be the case, and Akasaka is nearly killed when he rescues the boy. He ends up in a hospital to have his wounds treated, but he can’t stay in bed long. His wife is due to give birth any time now, so he knows he needs to call her. As it is, people are shocked he left her at all when she’s so close to the end of her pregnancy.

Unfortunately, the phone lines are cut in the hospital. This manga takes place in the days before cell phones, so Akasaka limps out of the building in search of a pay phone. When he finds one, it too has been cut. He looks for another booth and gets the same result. Then up walks Rika, the little girl who’s either extra cute or extra scary. And she has scissors in her hand. She probably isn’t even old enough for big girl scissors, but she’s still off slashing phone lines.

Then, just like that, the scissors are out of her hand, as if they were never there to begin with. She starts talking to Akasaka, saying she’s glad he’ll survive this village. 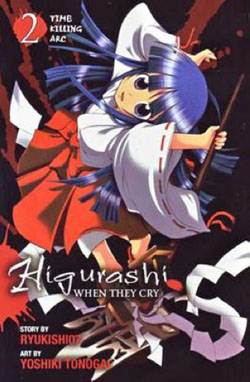 She launches off into grave predictions of murders, including her own, citing the days and years they will take place.

After this, a terrible thing happens to Akasaka. Yes, he survives, but she was right when she told him he would deeply regret going to her village. Some years pass, and Akasaka is chilled to know her predictions all come true. He’s tormented by guilt, believing he should have somehow stopped her from being killed.

The first volume in the Time Killing Arc was good, but this, the second and final volume of the Arc, is considerably better. Parts of it are very spine-tingling and spooky, particularly Rika’s predictions. Some pages have a truly chilling effect. It also offers something of a clearer understanding as to what goes on in the Higurashi stories, though of course it doesn’t explain everything. There will always be mysteries.