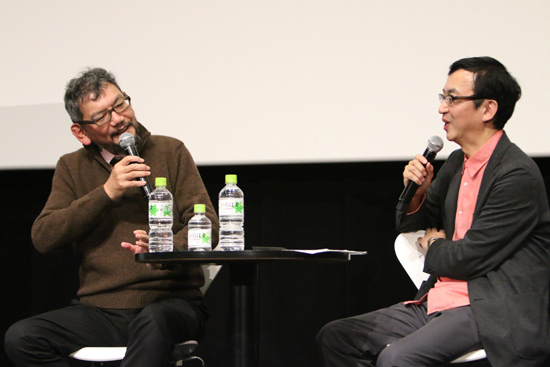 Anno and Hikawa speak at an earlier panel at TIFF.

Anno and Hikawa both recently participated in a series of panels at this year’s Tokyo International Film Festival, which showcased nearly all of Anno’s work in live action and animation over the years as part of a special “The World of Hideaki Anno” series.

An hour long clip reel compiled by Anno was shown before the panel. Featuring Anno’s favorite television anime opening sequences from the Showa era (1926-1989), the reel included everything from famous works like Mach GoGoGo (Speed Racer) and Jungle Emperor (Kimba the White Lion) to giant robot shows such as Mazinger Z, Gowappa 5 Gōdam and Armored Trooper Votoms. A total of 42 clips from 39 shows were shown. The clips reflected roughly 30 years of anime history, starting with Tetsujin 28-gō, which first aired in 1963, to Dancouga – Super Beast Machine God, which aired in 1985.

Anno later explained that the the clips were chosen based on the quality of the animation.

“Japanese anime started out as a way of getting away from Disney,” he noted during the panel with Hikawa. Indeed, the Japanese animation industry was still trying to find its own identity in the 60s, with studios churning out pioneering shows like Osamu Tezuka’s Jungle Emperor in this new frontier.

During the panel, the video reel was shown again, as Anno and Hikawa commented on each clip.

“The flamingos are amazing,” Anno said regarding the flock of pink birds in the opening sequence for Jungle Emperor. “I tried to do something similar on Nadia, but I couldn’t find animators who could do it, so I only had one bird. If I did it now it would be CGI.”

The panel was an opportunity to hear Anno speak as an animator, and more importantly, as simply an animation fan, rather than the psychological, philosophical mad-genius director he has become known as. Anno however, was modest about his skills as an animator.

“I think about animators when writing a scene,” he explained, “so if I can’t find an animator who can do what I want, I cut it out. If I could draw it myself like Miyazaki, I would do it, but I can’t. I can only do explosions.”

He went on to explain characteristics of various animators and studios. One particular example was the opening for the 1973 show Casshern by Tatsunoko Productions, in which the title character moves and jumps effortlessly across the screen.

The choice for the final clip, which was from the second opening sequence for the 1985 robot anime Dancouga – Super Beast Machine God was a personal choice for Anno.

“The guy working next to me at the time was doing the key animation for that opening,” he said. “It was around Dancouga when my generation started doing opening sequences.”

1985 was curiously the same year Yoshiyuki Tomino’s Mobile Suit Z Gundam aired, a series which Hikawa referred to as one where “Tomino was forced to do Gundam again.” The year was in many ways the end and a new beginning for Japanese animation; the end of innocence for an emerging industry.

“There isn’t much diversity now,” Anno lamented. “Today’s anime fans and creators are exclusively into anime. In the past, there were people in the industry who wanted to do other things, couldn’t get any other work except in anime, which was good.”

“Our generation was when anime fans started coming in,” he continued. “But even then, we liked other things too, like tokusatsu.”

Despite his feelings, Anno hoped panels such as these could inspire future generations of animators.

“It would be hard to make animation like the shows we say today,” he said. “I don’t mean to be nostalgic, but I hope what we saw today somehow leads to the future.”

Ryotaro Aoki is a musician and freelance writer. Born in Tokyo and raised in the United States, he came back to Japan in 2003 and has been based in Tokyo ever since. He writes mostly about music and pop culture for publications such as The Japan Times, The Guardian, and RedBull.com. Check out his blog and reach him on Twitter.