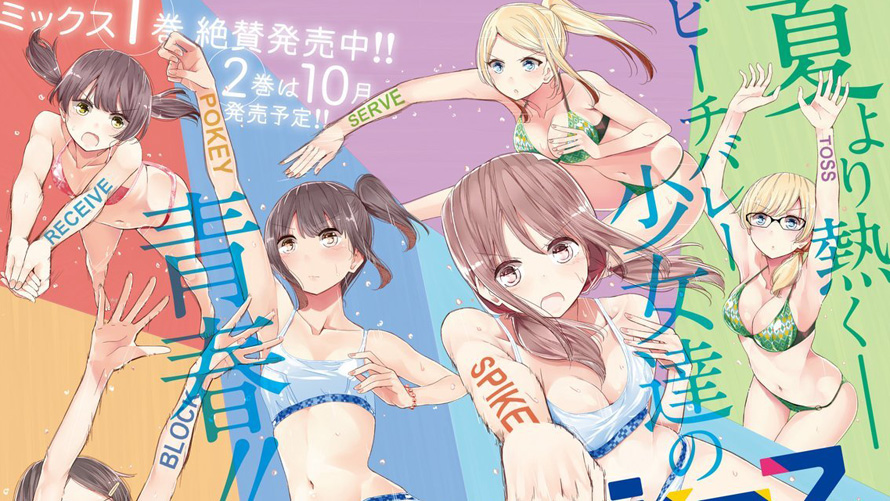 The first panel is a sweaty wedgie and the cover art looks like something you want to hide from your parents, but don’t be deceived (or excited): Harukana Receive is about sports, not fanservice, at least not fanservice in an overt shonen sense. Haruka Ozora, a high school junior who’s extremely tall, moves to Okinawa to stay in a beach house with her pint-sized cousin Kanata and their offscreen grandmother. When Haruka sees two girls playing beach volleyball on the shore, she immediately gets enthralled (thinking, “Wooow! Beach volleyball is INTENSE!” after watching four fairly boring volleyball panels) and joins them in a game, unaware that they’re local champions who can easily mop the beach with her.

But being defeated merely inspires Haruka for a rematch, and she jumps enthusiastically into the world of volleyball, accepting Kanata’s offer of help and training. As Haruka soon discovers, Kanata has a bad history with champion player Narumi: the two of them used to be partners, but Narumi “dumped” her because Kanata was too short. (“In beach volleyball, height is everything. No one will team up with someone as short as me.”) Now Haruka must navigate not only the shifting sands of the volleyball court, but the troubled relationships of her fellow players, all while trying to be the best. 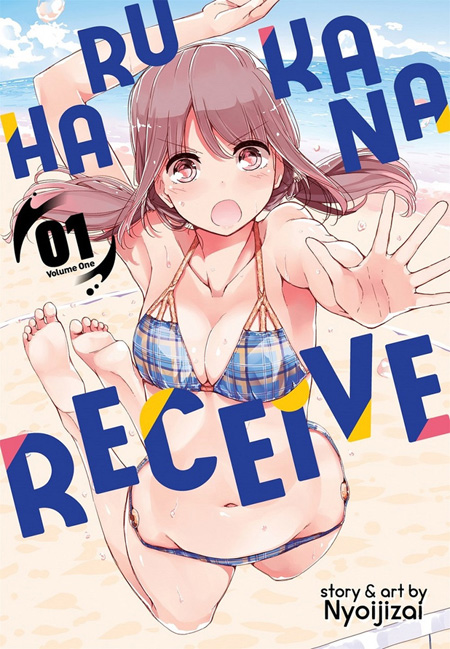 Published in Manga Time Kirara Forward, a magazine of cute-girl manga primarily aimed at men, Harukana Receive has a mild undercurrent of yuri vibes: the girls nurture close friendships, jokingly smack each other’s butts, and talk passionately about the importance of finding the right partner (“Beach volleyball is a two-person sport. The concept of an ace player has no place in beach volleyball!!”). Whereas a typical sports manga would expand the setting to show the characters’ classmates, families, teachers, and so on, Harukana Receive takes place in a curiously closed-off world, with almost no settings except beaches and no characters except four girls in swimsuits: it’s a relief when two foreign exchange students (also girls in swimsuits, naturally) show up at the end of Volume 1.

The limited scope may be due to the constraints of Nyojizai’s art: the action scenes are flat and not very exciting, and the characters all look the same, with the same elongated toothpaste-tube bodytypes. Like a true sports manga, at least it delivers interesting volleyball facts and tips, such as how to deal with wind, sand, and sun; how to hold your hands properly; and how to pick the right bathing suit (the less fabric, the less risk of sand getting inside). With the more successful anime currently streaming on Crunchyroll, it’s hard to escape the feeling that this is a case where the anime patches over the manga’s artistic weaknesses into something with wider appeal than the original.