Ok, first, before I say anything else, I have to get one thing out right off the bat: This box set is STUFFED with extras. It is truly amazing how much is present here. 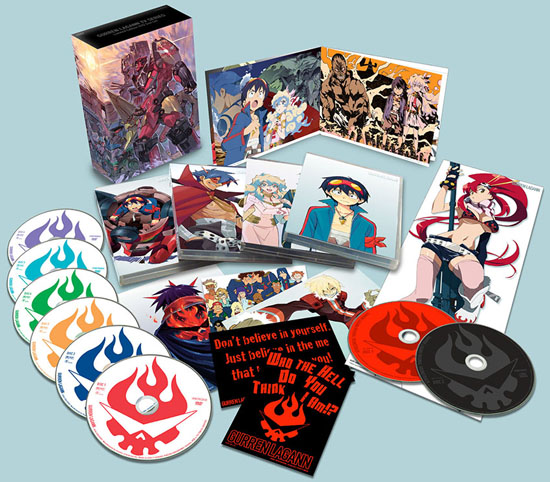 That’s the first impression I had when I cracked open the new Gurren Lagann DVD set Aniplex recently released. In wading through the postcards, poster, and booklet alone, it became clear this is the definitive set for the Gurren Lagann fan (other than the upcoming extra-expensive Blu-ray release).

For those who haven’t watched the show before, here’s the lowdown: On a futuristic Earth, humanity has been driven underground by a set of aliens who look like giant-faced living mecha, ruled by the Spiral King Lordgenome. Humans make their way drilling from one area of the Earth to the next while living in constant fear of earthquakes, naturally. One young boy named Simon digs his way around while being shunned by fellow villagers. The only real friend he has is his boisterous brother Kamina, who is determined to see the surface world no matter what anyone says. Simon eventually encounters a strange drill bit called the Core Drill, as well as a peculiar mecha that also looks like a giant face. 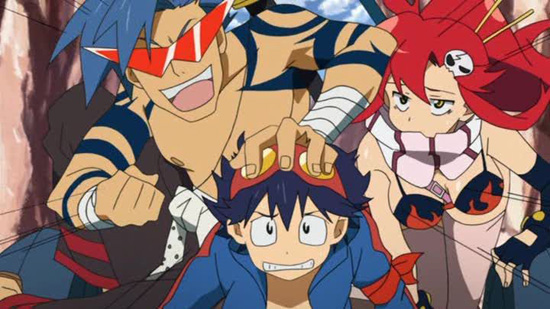 At nearly the same time, surface aliens attack and Simon learns that his newfound mecha, called a Gunmen, can fight off these creatures, especially when combined with Kamina’s equally strange mecha which he captures on the surface. Kamina invites Simon to be part of his Team Gurren, and they eventually come to call their combined mecha Gurren Lagann. Together with a lovely rifle-wielding warrior girl named Yoko they set out on a multi-year quest to lead humanity to reclaim the Earth from the invaders, though it turns out their goal has repercussions that change the world and affect the galaxy more than anyone could have ever guessed.

Director Hiroyuki Imaishi (Dead Leaves, the upcoming Kill La Kill) gets crazy hell on this series, with hyper-kinetic energy depicted by outlandish amounts of sketch lines and implied motion. If you’ve seen his previous work on the series Panty & Stocking with Garterbelt you may have an idea what the show is like. You could add in influences from giant robot shows by Go Nagai (Mazinkaiser) and Ken Ishikawa (Getter Robo) considering how wild the mecha designs get. The story is both funny and epic, with some poignant moments every so often for good pacing. Several years are covered and it almost feels like a tale of two anime considering how many events are covered in the story. There’s also Imaishi’s addiction to drills which pops up throughout the series. In one of the extras segments, producer Yasuhiro Takeda notes “the director’s love of drills is almost child-like.” 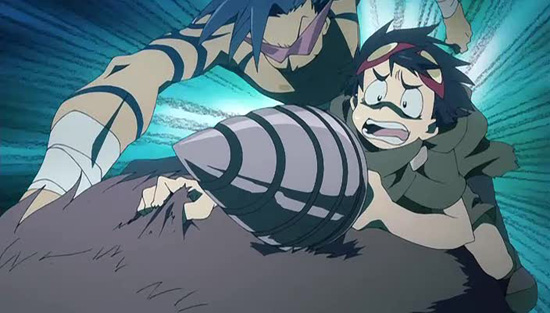 Speaking of the extras, there’s a good deal to discuss. That quote above comes from a video interview with Gainax members about how Gurren Lagann was conceived. Producer Yasuhiro Takeda, planner Hiroyuki Yamaga, and assistant director Masahiko Otsuka discuss how they targeted separate audiences and their favorite scenes from the show, among other things. In another video Seiyuu Marina Inoue reprises the persona of her cutesy character from the show for a behind-the-scenes segment called “Yoko Goes To Gainax,” interviewing the creative staff. This is a very informative video on how animation process is done, with peeks at drawings and equipment. The piece has very bubbly energy between Inoue’s personality, bouncy music, and good editing.

The 3D test clips were equally interesting for integrating multiple CG objects with flat backgrounds set to music. Mostly explosions ensue in one form or another but these are fascinating clips nonetheless. In a nice interview with Shoko “Shokotan” Nakagawa, who sings the opening theme, she talks excitedly about her interaction with U.S. fans and how excited they were for the show, particularly her theme. 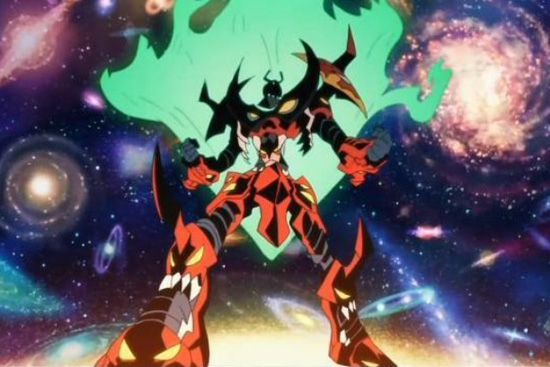 The music CDs are rather nice, too. Orchestral background pieces and up-tempo jazz like Cowboy Bebop fill the disc before going heavy metal, with bits of blues, as well. There are some interesting remixes of “Rap Is A Man’s Soul” (“Fight The Power”) on the second disc, which also tends to have more standard sounding music than the jazzy first CD, along with a bit more hip-hop. The picture booklet containing song titles and episode names is truly stuffed with imagery. With the amount of stickers, posters and postcards here, there’s all kinds of memorabilia in this box set and something for every kind of music fan and Gurren Lagann fan to enjoy.

There’s also an alternate version of episode 6, which featured the cast doing the obligatory hot springs adventure. Eh, its there for those who like this sort of thing… 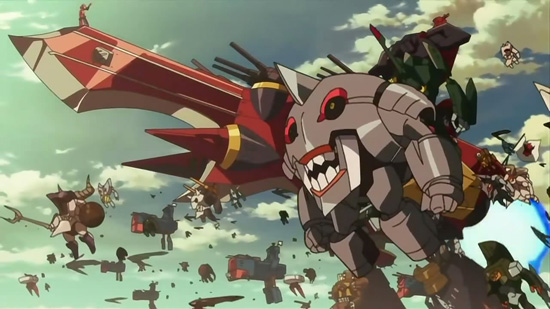 In any case, between the show and the extras included, this is one box set I’d have to seriously recommend. My only quibble is that on the English dub, actor Yuri Lowenthal sounds a bit old to be playing a teenage boy like Simon. But as the series progresses over the time span it does, he settles into the role appropriately, as does the rest of the cast who perform admirably for the most part. There are different places online you can find this box set for a discounted price. If you’ve got a hundred bucks or so and you’re a genuine super robot fan, I think you could do worse with your funds than to pick this one up.