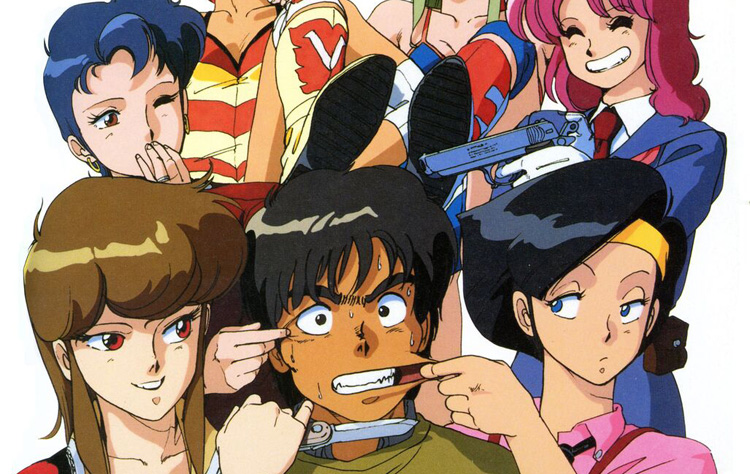 “The more expensive the car, the more fun it is to blow it up.”

This statement by Kenichi Sonoda at this month’s Sakura-Con in Seattle boils down both the Riding Bean and Gunsmith Cats creator’s style and enduring popularity into a single statement.

It’s safe to say that Sonoda’s popularity in the U.S. peaked while VHS tapes were still a valuable commodity, but if the response and enthusiasm he garnered at the convention are anything to go by, fans still love him and the characters he created.

Sonoda turned the tables on what was supposed to a retrospective panel about his career and instead opened up the floor for any and all fan questions. Anyone who’s been to a con can attest that fan Q&A can be a risky proposition, but Sonoda used every question as a springboard for interesting tangents about his career, his work, and his creative process.

Sonoda dabbled in doujinshi in high school, but his professional break came at 21 when he began doing design work for Gainax and Artmic. Gainax, which years later created Neon Genesis Evangelion, was working on their first feature film, Wings of Honneamise. Sonoda’s contributions to the film were minimal to the point that he managed to stump the audience when he asked if anyone knew what they were. The answer? A train that ran through the background of a scene and some signs and decor in during a scene in a red light district. 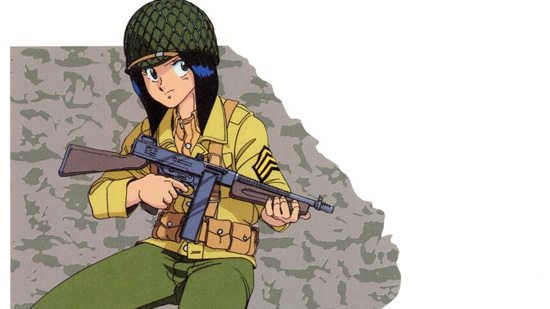 His work with Artmic started off with a similar level of obscurity, illustrating a series called Combat Jyou. Sonoda pointed that the name wasn’t a G.I. Joe reference, but a pun on the Japanese word for daughter, “ojyousama.” Soon after he was working shows like Gall Force and Bubblegum Crisis, which were some of the earliest anime to be professionally subtitled and released in the U.S., but they’re clearly a bit awkward for Sonoda. As an employee of Artmic, he didn’t actually own the work he did on those shows, or even the classic OVA Riding Bean, on which he wore just about every hat except that of director.

“Because Artmic owned the rights to the Riding Bean name and designs, I couldn’t use the same title or make anything too similar,” Sonoda explained. “But I didn’t think I could create anything cooler than the original Riding Bean, so I had to keep some of the aspects intact.” 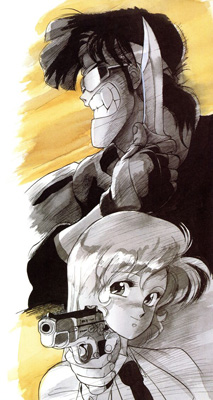 The result was Gunsmith Cats, a comic about the bounty hunting duo of Rally Vincent and Minnie May. A character named Rally Vincent had appeared in Riding Bean, but the comic version was different, trading blonde hair for brunette and a new ‘do inspired, Sonoda revealed, by Bubblegum Crisis’s Sylia Stingray. The character of Riding Bean also made a few guest appearances in Gunsmith Cats, with a few tweaks for obvious reasons.

Despite tensions over rights, Sonoda admitted that some of his favorite designs were created while he was at Artmic, saying Riding Bean is his favorite character and the hardsuits from Bubblegum Crisis are his favorite mechanical design.

Bubblegum Crisis celebrates its 30th anniversary this year, and Sonoda said it’s still worth watching. But he had harsher words for the sequel, which he barely worked on, when he quipped, “There’s no need to watch Bubblegum Crash.”

Other questions ranged from the stuff you’d expect, like “what influenced you?” (Gerry Anderson’s Thunderbirds, Air Wolf, Knight Rider) to “what’s your favorite car?” (old Mustangs, thanks to the films Bullitt, Vanishing Point, and Gone in 60 Seconds). He also touched on his working preference, which is non-digital paper and pen, but explained that his younger assistants prefer to work digitally.

As time was running out, Sonoda revealed he’d recently taken on a whole new job: sweet shop owner. After his father passed away last year, Sonoda had taken over the family business, a traditional sweets shop in Kumamoto that’s been around for 400 years. Stressing that while he was still committed to anime and manga, he explained he “couldn’t let that tradition die.”

Even with the family business as a new responsibility, Sonoda closed out his panel with a hopeful bit of news that had his fans cheering. Talks are underway for a new Gunsmith Cats anime, though they’re preliminary and nothing has been agreed upon.

“But, if that does happen, I would be the executive director.”

Hopeful news for fans longing to see Kenichi Sonoda’s unique brand of cool back on screen. 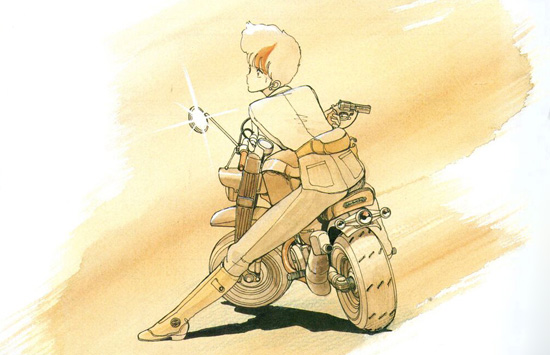 Fairy Tail: Dragon Cry Anime Film to Screen in the U.S.
Beyond the Boundary Anime Films Hit Blu-ray/DVD in August