We thought Gendo Ikari shaving off his distinctive and highly-rated beard was the pinnacle of anime-shaver collaboration, but that was oh-so-naive.

Razor manufacturer Kai has one-upped Schick with its new campaign that incorporates the original Gundam series to sell its new line of Xfit razors.

In the Twitter video promoting the new razors (which supposedly last for two months!), singer and former EXILE member Shunsuke Kiyokiba reminisces about First Gundam, talking about how Amuro had the power of youth and never gave up. 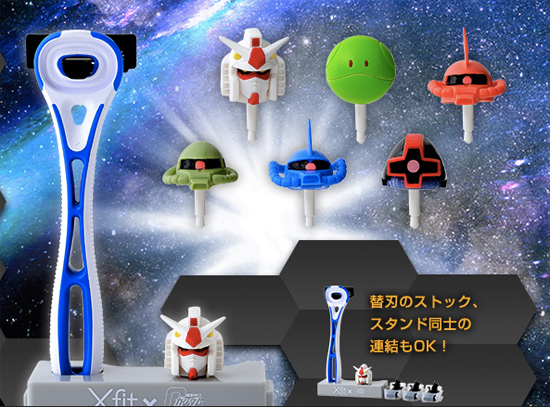 During the Xfit x Gundam campaign, which lasts until December, a lucky 500 customers will receive a speaker shaped like Char’s Zaku’s head.

The razor, which comes in Gundam and Zaku varieties, can also be placed into a stand featuring a variety of robot heads (plus Haro!).

Xfit Gundam razors: the perfect choice for people who want to incorporate some Gundam into their everyday lives but aren’t quite ready for the Char car.