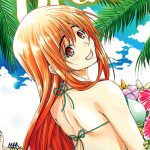 Kenji Inoue and Kimitake Yoshioka’s Grand Blue Dreaming manga first made its debut in Good! Afternoon magazine back in April 2014, and Kodansha Comics releases it digitally in English. The next stop for the series is the small screen, because the cover of the latest issue of Good! Afternoon revealed plans for a TV anime adaptation.

We’ll have to wait for further details to be announced.

Next Pokémon Anime Film Gets Official Title and Trailer
Hit the Hot Springs with the Is It Wrong to Try to Pick Up Girls in a Dungeon? OVA!