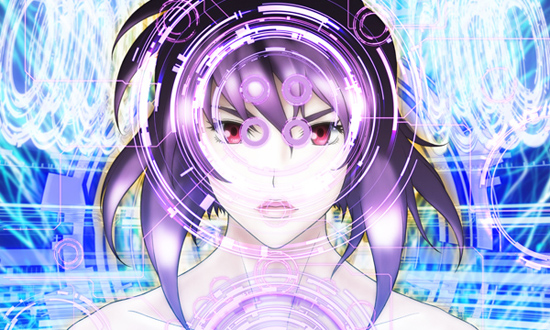 With all the skepticism over recent announcements of the Ghost in the Shell live-action movie, the 2015 animated film, and the lukewarm reception of 2013’s Arise films still relatively fresh on our minds, we thought it’d be a good time to look back to the Stand Alone Complex series for a glimmer of hope; since it turned out pretty decent, all things considered.

This review appeared in the very first issue of Otaku USA Magazine (June 2007). That issue has been out of stock at our online store for years, and is almost impossible to get one’s hands on nowadays, so we decided to pop this piece online for those of you who weren’t fortunate enough to snag a copy when it was on newsstands way back when.

Ghost in the Shell: Stand Alone Complex Solid State Society, available on DVD from Bandai Entertainment and Manga Video, is a feature-length television special that directly follows the events
of 2nd Gig, making it the latest—but certainly not final—chapter of the tale. 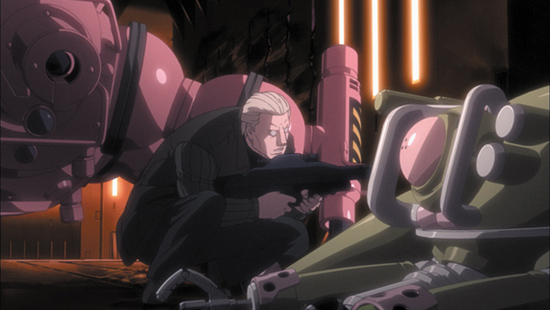 Solid State Society takes place two years after the conclusion of the Ghost in the Shell: 2nd Gig series. Things appear to be a bit shaken up, as lead character Major Motoko Kusanagi is no longer a member of the newly expanded Section 9. With the emphasis the series places on the procedural aspects of Section 9, Kusanagi being separated from the squad means that her role in the film is diminished from what longtime fans would be used to, though not nearly to the extent seen in Mamoru Oshii’s Ghost in the Shell 2:
Innocence.

Replacing her is Togusa, and becoming squad leader meant that Togusa had to make the ultimate sacrifice. By that I mean he no longer sports his trademark mullet, turtleneck sweater, and Mateba revolver. I always imagined that Togusa, in lieu of possessing cybernetics, relied on his mullet as the source of his power such that cutting it would bring about his downfall, much like Samson in the Old Testament. 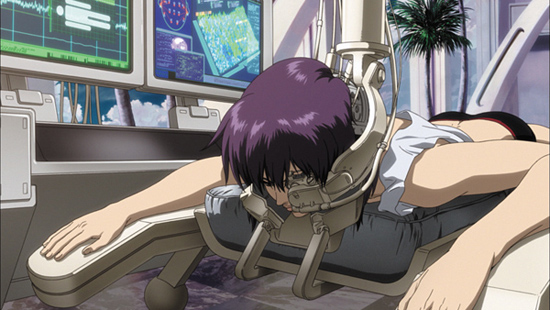 Solid State Society opens with an investigation by Section 9 into a series of suicides being carried out by members of a foreign political group seeking asylum in Japan. It is quickly discovered that a common thread exists between the deaths: the involvement of a mysterious entity known as the “Puppeteer” who seems to have some sort of connection to the Major. If you think this sounds awfully similar to the plot of the original Ghost in the Shell movie (which, once again, is in its own continuity separate from this!) that’s because much of it essentially is, albeit with several alterations.

Critics of Kamiyama’s work on the Ghost in the Shell series often point to the fact that much of the SAC stories are merely reinterpretations of stories told in either Shirow’s manga or previous Oshii works, but Shirow’s forte has always been as an idea man. Clearly, Shirow desperately needs someone to filter out his good ideas from his awful ones, someone who knows to keep the “there’s a future where everyone is a cyborg to some degree” aspect of Ghost in the Shell and discard the “oh, and they have lesbian sex with each other while removing their arms too!” bit. For my money’s worth, Kenji Kamiyama is that man, able to faithfully adapt material while striking a balance between action, character development, and philosophizing. 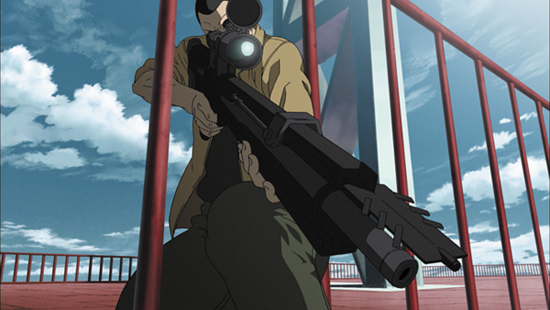 That is not to say that Solid State Society is a popcorn flick. For all its spectacular action scenes (I, for one, am always up for seeing a good sniper duel), this is certainly a film with adult content. When someone says “adult content,” it’s only natural to immediately think of sex, violence, and nudity. This piece does contain a fair share of bloody violence—there are multiple instances of people putting guns to their heads and painting the walls with their brains—and some brief scenes of subservient female cyborgs of varying degrees of pubescence wearing rather skimpy clothing to cater to otaku maid outfit fetishes, but this is “adult” in the sense that you basically have to be an adult to understand what’s going on and how everything relates.

The widespread popularity of Ghost in the Shell in the US always struck me as somewhat of a curiosity, since the material is fairly demanding of its audience in comparison to other highly popular anime titles. I wonder how many fans of the series are just tuning out during the non-action-oriented segments, opting instead to focus only on the parts where people, usually a girl in a revealing outfit, perform superhuman feats amid spectacular gunfights and mecha explosions? Certainly that was the only mind-set to take that made watching the sequels to The Matrix tolerable, and it’s well known by now (among anime fans and those willing to watch DVD extras, anyway) how those movies were pitched and made on the promise of essentially being a live-action Ghost in the Shell. The real Ghost in the Shell series has always made action a secondary concern, and so pure action fans would in all likelihood find it boring. The real meat of the series has been the characters and how they function together as a highly effective cohesive unit with a side helping of exploring what it means to be human. Then again, as short as most of the action scenes may be, the animation during them is always top-rate. Production IG is the best in the business when it comes to merging 2-D animation with 3-D computer graphics such that one doesn’t stick out like a sore thumb relative to the other. When it’s finally time for the guns to fire and things to blow up, they do so in spectacular fashion. 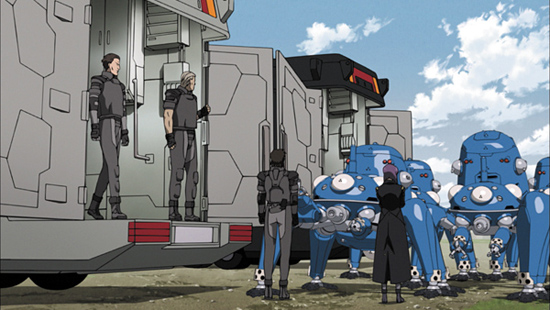 Ghost in the Shell in some form or fashion has been an incredibly popular anime title in America for over a decade. In fact, it’s about 10 times more popular in America than it is in Japan. The continuation of the franchise depends entirely on the fans in America, not Japan, and Japan knows this. That’s basically why Ghost in the Shell: Stand Alone Complex Solid State Society guarantees more of what we’ve come to love: same characters, same setting, and the same great animation, all set to another fine soundtrack by Yoko Kanno. Sure, it’s deliberately similar to the original movie and it feels like an extended episode of the TV show right down to having an opening credits sequence, but following the less-than-stellar reception to Ghost in the Shell 2: Innocence, it became clear that this is exactly what people want to see. Although nothing has been formally announced, you can rest assured that even more is on the way.