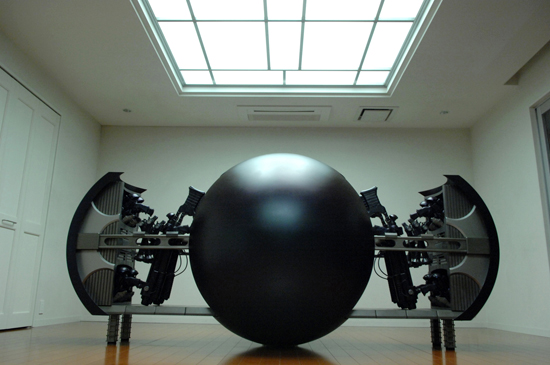 What would you do if, moments after what you took to be your dying breath, you found yourself in an eerily sterile room surrounded by complete strangers… and one large, menacing black ball? Gantz may not explicitly ask that question of the viewer, but it’s one they’ll no doubt be mulling over throughout the film, just as one would while reading Hiroya Oku’s long-running manga or watching the 2004 anime adaptation.

It’s also a question that plagues the series’ protagonists, who find themselves inexplicably thrust into that very situation. Kei Kurono (Kazunari Ninomiya) and Masaru Kato (the ubiquitous Kenichi Matsuyama) are childhood friends who have since drifted apart. That is until one fateful day, when they find themselves at the same subway station, both watching with morbid curiosity as a drunk man stumbles onto the tracks moments before the next train is scheduled to arrive. With no bystanders wanting anything to do with this, Kato takes charge and heads down to help him, and Kurono soon begrudgingly joins him.

And so they save the day (and an oblivious wino) only to—SPLAT—end up painted across the tracks like an avante-garde art project.

This is where that curious room comes in, along with the even curiouser eponymous ball. Gantz provides its “guests”—of varying age and gender, all post-mortem whether they know it or not—with vague instructions right off the bat. The profile of an “alien menace” is shown, weapons and black suits thrust out from the ball, and, before there’s time to make any sense of it all, those in the room are zapped away into the middle of the city on a mission they never signed up for.

As Gantz progresses we learn more and more about the “mission,” albeit in obscure trickles of information with no true reason applied. That’s half the fun of Oku’s original manga and Gonzo’s uneven but entertaining animated spin on it; it’s an ever-evolving mystery that doles out the goods just when you’re at your thirstiest. Most of the people in on the mission with Kurono and Kato are just there to be there; fodder for alien adversaries of increasing strength and malice. The other principle character—the busty Kei Kishimoto (Natsuna Watanabe)—is little more than something for them to ogle for the first half of the film. Her character, along with our two leads, does get fleshed out a bit more as the three connect through their harrowing journey.

So they’ve got the cast down pretty well—Kurono is still a somewhat uneven protagonist here, as he is in the source material. He wavers from unsure to cocky, from self-serving to self-sacrificing, almost on a whim. He’s maybe a little more likable right off the bat in the film, but only by virtue of Nino’s sly smile and occasional Peter-Parker-learning-how-to-be-Spider-Man goofiness. Supporting cast members are also solid for the most part, though you shouldn’t expect the same menace from certain ancillary characters here due to time constraints and pacing that’s almost always on the move.

But what about the ALIENS? Gantz has some of the weirder designs for its “bestiary” of any media concerned with close encounters, and Shinsuke Sato’s live-action depiction doesn’t disappoint in that regard. I came in expecting ugly, CG-ridden creatures at best, but they hit a home run with the way the aliens are depicted. With the exception of the third act’s baddies, everything from the Greenonion Aliens on utilizes loads of practical effects. This doesn’t just hold true in the costuming department, but in the generous amount of blood and violent explosions that complement the action, keeping Gantz from looking as cheap as the majority of its contemporaries. Yes, Gantz manages to be both relatively faithful to its source material and look like an actual film. 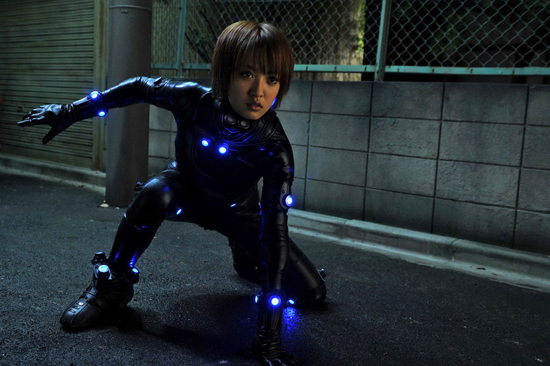 In fact, Gantz‘s main lingering issue comes as a result of trying to cram even a portion of that (still ongoing) source inside its healthy 128 minute running time. It may move at a brisk pace, but it sacrifices a few key elements as a result. From the start Sato struggles to capture the series’ tension and general atmosphere of uneasiness. Take the opening sequence, for instance. Despite the barreling peril that serves as the impetus for the entire story, very little suspense is conveyed. It comes off as more of an “everyone knows what happens here so let’s just get to the damn ball,” and that’s a disservice to new viewers.

Most everything else, however, should service those newcomers just fine. Seasoned vets of Oku’s world will find their fair share of nits to pick, but that’s unavoidable. Even for a film that is so openly set up to lead into a second, I found myself pretty satisfied with the course it ran. I’ve yet to see the sequel so I can’t personally tell you if the “Perfect Answer” is as advertised (though Fernando Ramos can), but Sato and his crew have done an admirable job in delivering a Gantz film that doesn’t look like it was shot on consumer-level HD video, and, most importantly, doesn’t pull its punches.

New People Entertainment’s 2-disc DVD of Gantz is a fine release for those not interested in or incapable of playing Blu-rays. Disc 1 contains the feature in both Japanese with English subtitles and the premiere-crowd-riling English dub. Disc 2 only really has one notable feature—a half-hour interview with director Shinsuke Sato (The Princess Blade)—but it’s one worth watching.

The Vault of Error: Garaga
Photos Emerge from Set of Live-Action Rurouni Kenshin