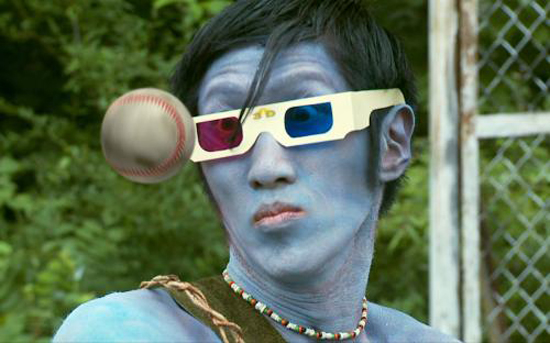 A vomitorium established by ace producer Yoshinori Chiba to allow Japan’s grodiest a stage to run wild, it was supposed to be the V-cinema equivalent of huffing a plastic bag full of paint thinner. What we got instead was a fossilized ‘lude that sunk the user straight into a dead zone of lame, self-congratulatory schlockfests.

Nothing could shake the overall feeling that everyone involved was goofing off. They were too self aware. Too in on the joke. And worst of all, boring. It all seemed like a carefully constructed business plan contingent on racking up YouTube views and pandering to the bottom of the gaijin fanboy barrel. Only the decidedly off-brand Cold Fish, and crazed kiddie fare Karate-Robo Zaborgar, offered a break from the lazy Machine Girl retreads and calculated cult-flick-in-can approach.

But then came Battlefield Baseball director Yudai Yamaguchi. Raised on SEGA and Sonny Chiba karate infernos, he, along with Tak Sakaguchi, birthed the drooling, mongoloid love child that is Yakuza Weapon. That same year (weekend?) he cranked out what at first appeared to be a bargain-bin Battlefield Baseball variation. It feels good to be wrong.

After blasting a fiery fastball into dad’s cranium (crooner Micky Curtis), Jubeh (Tak Sakaguchi) vows to never pitch again. Years later, we find Jubeh a notorious juvenile delinquent en route to the Tochigi Juvenile Detention Center, where everyone has the appearance of a nicotine-stained pensioner.

An elbow-deep cavity search performed by a gender-bending Gestapo gal is followed by Jubeh being sent to a cell block known as Pterodactyl Hell, where posters warn that “Squeaky Shiny Poo Poo is coming soon.” In charge of this scum-villa is Frau Ishihara, a goose stepper who’s proud of her grandpa’s Nazi heritage. She calls Jubeh into her human organ-adorned office and demands that he join the prison’s baseball team. Jubeh refuses and Ishihara says that she “stopped menstruating years ago.”

Back in his cell, Jubeh dreams that his brother is an underage pornostar who slaughtered his co-stars, then wakes up and agrees to join the team in exchange for a full pardon. But instead of launching into Bad News Bears territory, we go straight to the “big game” against St. Black Dahlia High.

Set in an empty lot that the latest Sentai show apparently wasn’t using that day, it quickly becomes apparent that home runs don’t mean jack in the Juvie League. It’s all about which team can score the gnarliest kill. Thankfully, Yamaguchi realizes this can only go so far, and keeps it varied by presenting us with secret passageways that open with a Sieg Heil, Jubeh busting moves ripped straight outta the Sonny Chiba Guide to Fighting, and garrote-loaded baseballs that bisect players twenty different ways while gaijin neo-Nazis devour sponge cake. And just when you think there’s no way they’re going to be able to close this freak show strong, the play-by-play announcer tells us to “prepare to defecate” and a God-loving Satan named Glockenheim arrives.

Overcoming any and all shortcomings with an absolute dedication to genuine bad taste, Yamaguchi exhibits the kind of manic, good-natured depravity—if not the filmmaking chops—that made a young Peter Jackson stand out. Sure it looks like it was shot in between takes on Yakuza Weapon, but there is a sincerity to its crudeness. In the midst of the misguided storm that was Sushi Typhoon, Yamaguchi set out to gleefully stage everything ever depicted on a big box VHS cover. It’s as if he’s forced the titans of eighties junk culture to stand side-by-side in the john, engaged in a for-the-ages sword fight, crossing streams and filling the toilet bowl with a neon slime, until some forgotten Go Nagai trash-manga-in-motion slithered out. 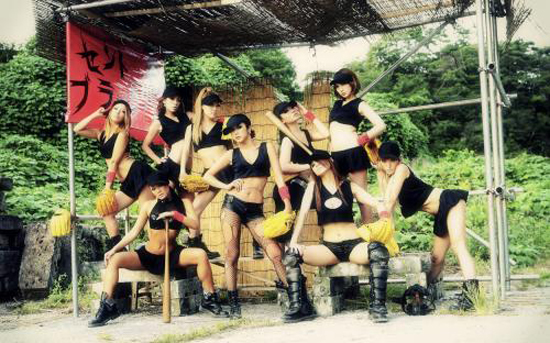 Morally troublesome in the best way possible, and containing the grandest exploding torso since De Palma’s The Fury, this and fraternal twin Yakuza Weapon gives us a glimpse at what could have been. The last outpost in the J-movie exploitation final wars. So all hail Sushi Typhoon? Maybe not. But Yudai Yamaguchi? You got it.