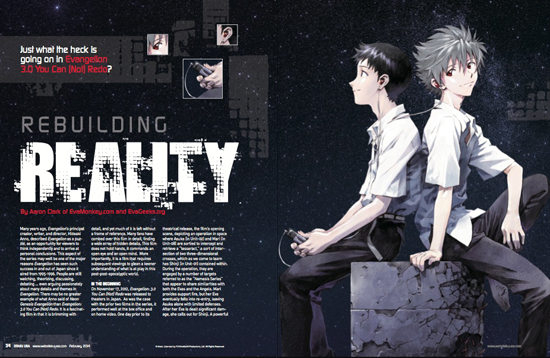 As the cover of the latest issue of Otaku USA magazine boldly illustrates, the talk of the town this time around is none other than Evangelion: 3.0 You Can (Not) Redo. Even more so than the previous two Rebuild films, Eva 3.0 is already a divisive beast, so we turned to Aaron Clark of EvanMonkey.com and EvaGeeks.org to shed some light on just what in the world Hideaki Anno and Gainax are doing here.

“This film does not hold hands, it commands an open eye and an open mind,” Clark says of Eva 3.0, going on to describe why the film benefits from multiple viewings. We may not unlock all the mysteries at play here, but the discussion and analysis should keep us plenty busy until the fourth and final film arrives. In the meantime, be sure to pick up the issue and dive into our feature for a proper jumping off point and some insight into the movie’s production.

Read our full story on Evangelion 3.0 in the February 2014 issue of Otaku USA Magazine. On sale now, it also includes in-depth coverage of Free!, Captain Harlock, Robotics;Notes, and more of your favorite anime, manga, games, and music.