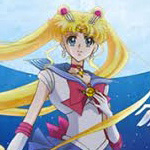 The new take on Naoko Takeuchi’s Sailor Moon manga is gearing up for its big premiere, and Viz Media is celebrating by promoting the upcoming simulcast on Neon Alley and Hulu. Sailor Moon Crystal premieres on both services July 5, the same time as its streaming premiere in Japan, and new subtitled episodes are scheduled to debut in Japan and North America on the first and third Saturday of each month.

Based on Naoko Takeuchi’s beloved manga, SAILOR MOON CRYSTAL retells the story of Sailor Moon as she searches for her fellow Sailor Guardians and the Legendary Silver Crystal to stop the dark forces of Queen Beryl. This true-to-the-manga release will captivate and thrill a new generation of viewers!

The original SAILOR MOON anime series was also inspired by the manga series, and follows Usagi, a clumsy but kindhearted teenage girl who transforms into the powerful guardian of love & justice, Sailor Moon. Along with her team of planetary Sailor Guardians, they fight to protect the universe from the forces of evil and total annihilation!