El Shaddai: Ascension of the Metatron

Some of your favorite Japanese games crib from Western myth. Sephiroth, your favorite bad guy, takes his name from Kabbalah. The Shin Megami Tensei games make a living out of snatching up any mythological figures they can get their hands on, mostly because the names sound cool. Melchizedek (a biblical priest) was one of my strongest monsters in Persona 3. I don’t remember the bible saying anything about Melchizedek’s silver wings and Super Sentai costume. These games love name-dropping, but they rarely do anything more than pay lip-service to their inspirations.

El Shaddai is not a game about name dropping. Sure, it smudges a detail here and there (read: adds laser beams), but it’s largely accurate. In short: a long time ago the angel Semyaza and his pals (the Watchers) went down from heaven and started sowing their wild oats all over the place. Their offspring—the giant and perverse Nephilim—ran roughshod over the world, devouring everything in their path. Soon there was nothing left. In their hunger they began to consume each other. Some biblical sources cite ridding the world of the Nephilim as reason for the great flood depicted in Genesis.

It has betrayal. It has cannibalism. The perfect videogame!

Things are getting pretty messed up down on Earth. God, by way of his envoy Lucifel [sic], sends Enoch to deal with these willful angels. It’s a dangerous job, but Enoch’s time in heaven has been well spent: in addition to his kung-fu proficiency and Chun Li kicks, he’s a virtuoso with the holy weapons. On the menu is a laser chainsaw, a Gradius-like group of helper ships, and a pair of lightning gauntlets. None of these were discussed in my Sunday confirmation class. More’s the pity: I might’ve stayed awake. 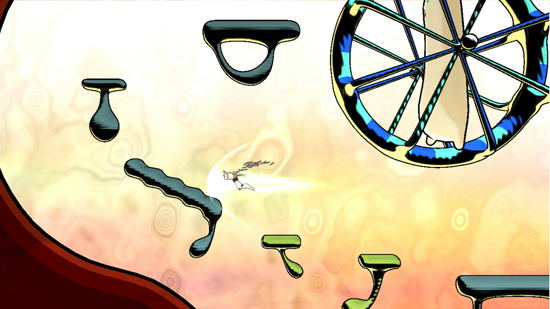 The fighting is more complex than its single button combos would suggest. Dense XXYXY maneuvers are replaced by timed button presses, where long delays between hits translate to guard breaks and cinematic counterattacks. Instead of focus-firing enemies, here we’re encouraged to strip weapons from the wounded and move on to the next. With proper crowd control a group of strong enemies can be systematically disarmed and left ripe for the picking.

But, even with the quasi-hidden depth, there’s a limited amount of attacks and a limited amount of enemies on which to use them. They all wield the same three weapons as you, and the variety is as sparse as you’d expect. It ends before things get stale, but it’s a photo finish. Still, there’s joy in a simple-yet-rewarding move list. Most action games—even the best ones—feature bloated movesets. Here, nothing is wasted. Every attack feels purposeful. The animation keeps pace with the damage. Every strong attack comes with a requisite build-up pause, and the finishing moves in a combo often shake the earth. It’s tough to worry over small combo-trees when in the middle of a holy beat-down.

Between arena combats Enoch keeps it fresh by hopping over bottomless gorges or side-scrolling through mazes of spikes. Like Mario, but in prettier confines, he sits astride ukiyo-e waves that surge toward his destination. He navigates cartoony levels where wibbly-wobbly creatures push beach balls to and fro. Time and style shift in schizophrenic leaps, but all worlds feel integrated. This is the most evident benefit of playing a game directed by the Takeyasu Sawaki, the guy responsible for Okami’s stunning art design. You could create an entire game with only a handful of the different worlds depicted in El Shaddai. How lucky are we, then, that we get nearly a dozen? 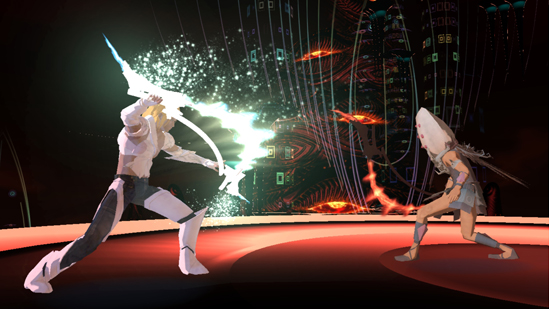 Each jump, each monster killed brings him closer to his prey. In the myth the fallen angels are responsible for humanity’s sins. It’s the angels that teach men how to forge weapons and armor, how to adorn themselves with stones. They are presented as wicked even though their gifts (technology, pride) are not what contemporary values consider evil. Through a modern lens, it’s a distressing read: is it really so bad to put on a little make-up?

Sawaki’s version of story is more generous to its antagonists. The angels’ role is Promethean. Semyaza and the other Watchers love mankind and long to elevate them above their primitive state. As Enoch, the player experiences some conflict: is it fair to take away mankind’s newly received knowledge? Are the angels just being petulant? They profess to love mankind, but seem blind to the results of their actions.

The beginning of the Book of Enoch, the part El Shaddai concerns itself with, is a curiously relevant parable. Even two thousand years later we can’t completely shake its concerns: taboos about technology, about knowledge, about pride. We deal with those backlashes against progress every day. We see it everywhere on the Internet, we hear it from our politicians. The text is nearly as old as the Roman Empire, but it still struck a chord with me.

Is Enoch’s crusade righteous? Probably not. So then: the angels are justified? Well, not really. This philosophical worrying doesn’t come from the text, it’s all form the game’s developers. No one’s a good guy. No one’s a bad guy. These somber thoughts aren’t the kind you usually see in a videogame, especially not one made of such rich pastels, and deep blacks, and brilliant blues. 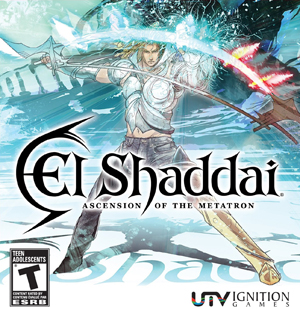 That something this pretty should also be intelligent: it’s almost selfish.

This is a game about punching monsters and jumping over pits. It performs these tasks admirably. Would that it devoted as much time to its philosophy as it did to its platforming. Nevertheless its connection to the source material is strong and its questions are worth asking. “Is Enoch ultimately right? Are the angels ultimately wrong?” I don’t know, but if, somewhere between the punching and the jumping, one person stops to think, then I’m willing to call it good.

A Look at Popular Doujin-Game VALLENDIOSS
On The Shelf – September 14, 2011