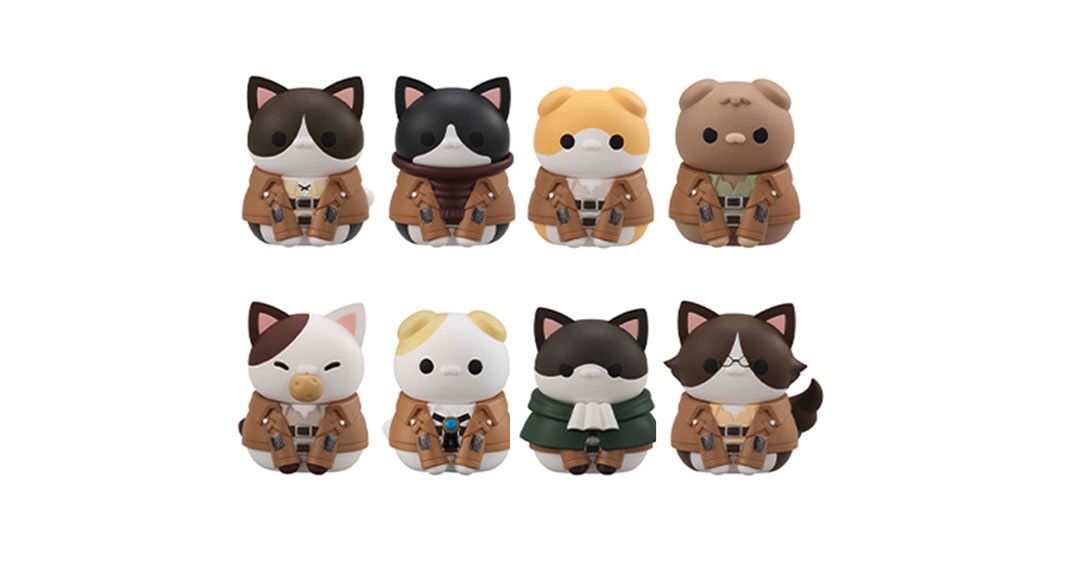 The Attack on Titan manga is done, but there’s still more of the anime coming, and there has been and will be lots of merchandise around the franchise. It has become one of the most successful and beloved Japanese franchises ever, so some upcoming merchandise decided to pair the series with another thing Japan loves: adorable cats.

The cats are approximately three centimeters tall, which is just over an inch. The whole set costs 5720 yen, which is about $41.45.

They won’t be officially on-sale until December, but they are available for pre-order here. Just know that the site is in Japanese.

And this isn’t the first time Ami Ami has decided to take a popular anime and manga and turn it into cats. Take a look at how they did the same thing to the cast of Naruto.

Kodansha publishes the Attack on Titan manga in English, and gave this description of the series:

“A century ago, the grotesque giants known as Titans appeared and consumed all but a few thousand humans. The survivors took refuge behind giant walls. Today, the threat of the Titans is a distant memory, and a boy named Eren yearns to explore the world beyond Wall Maria. But what began as a childish dream will become an all-too-real nightmare when the Titans return and humanity is once again on the brink of extinction …

Attack on Titan is the award-winning and New York Times-bestselling series that is the manga hit of the decade! Spawning the monster hit anime TV series of the same name, Attack on Titan has become a pop culture sensation.”