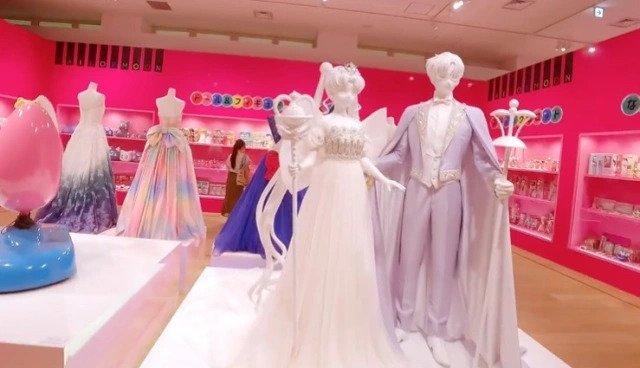 Some changes have been made to the Sailor Moon Museum exhibit, which is located at the Roppongi Museum in Tokyo. The museum exhibit has phases (referred to as “volumes”). The first volume concentrated on the first two story arcs. The exhibit has moved into the second volume, and now has a concentration on the third and fourth story arcs.

To get people interested in going, a video of the museum was placed online. The camera footage from it comes to us from a drone, and the drone literally flies into the museum and around the exhibit. The video is just over a minute long, so it doesn’t linger on any of the details, like the walls filled with artwork from both the original manga and from the anime. However, it gives people an idea of what they can experience if they go.

Besides the manga and anime art, the exhibit includes the Sailor Moon wedding dress collection and outfits from the former stage show Sailor Moon restaurant.

This segment of the exhibit will be around until November 6, and then the museum will just move on to volumes 3 and 4. All told, the exhibit will stick around until December 30. By that time tourism will have opened up in Japan, so people from different countries can have an opportunity to see the exhibit for themselves, and not just through videos and pictures.

Sailor Moon is one of the most successful manga and anime franchises of all time. Kodansha publishes the manga in English, and gave this description of the first volume: