As part of AX Cinema Nights, A Silent Voice is returning to theaters on October 12, available both dubbed and subbed. Lexi Marman Cowden, a professional actress who plays Shoko in the English dub, is deaf like her character. She spoke to Otaku USA about her connection with Shoko, how playing the character was healing for her, and what she’s up to now.

How did you get the job of playing Shoko in A Silent Voice?

I have been acting ever since I was a kid. When my agent submitted me for this voice over role of Shoko, I was so excited to jump on board! Just auditioning for the role was so much fun! It was definitely an uncharted territory for me. Luckily, my husband who is also an actor, has been in the voice over industry for years. He guided me every step of the way! I developed a newfound appreciation for that field of work and for voice over actors! It seems so simple but it’s a lot of work and creates such a huge impact on every project!

How did you approach playing Shoko? Had you done voice over work before?

I had never done voice over work before so this was a new challenge! I struggled hearing the beeps in the sound booth and had to be cued as to when to say the lines! The directors were incredible. They have such a love and respect for anime and I wanted to make them proud! I found myself wanting to make sure that I did Shoko justice because she deserved to finally have her voice heard in the way it was meant to be heard.

You have said that playing Shoko was healing for you. How so?

Growing up I was severely bullied and made fun of. I found myself identifying with Shoko… her pauses … her hesitation … her despair… her anger and her exhaustion. It brought up all these memories and feelings I had kept bottled up for years from being picked on. To be in that little sound booth when it was just me and the directors and my husband and Shoko on the screen … I felt I could finally let it all out and just channel it through her character. I will always treasure Shoko for helping me heal.

Are you an anime fan personally? Do you have any favorite titles?

A Silent Voice of course! Haha. I have always loved going to the conventions and being a part of the comic/anime world! After A Silent Voice, I have developed a complete respect for the artwork of anime and its beautiful storytelling culture.

Where can people find out more about you and your work?

I am working on a few projects and just got back into directing again! No matter what future project I will be working on — I will always carry Shoko with me and am thankful for her showing me that there is beauty in healing. 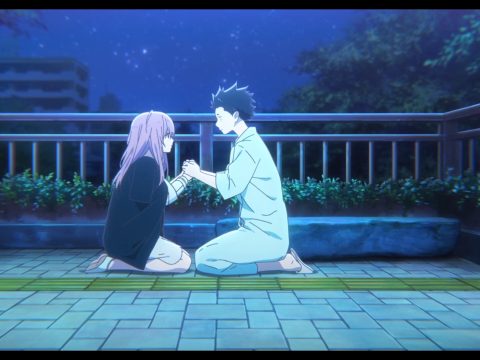 In Honor of Deadpool, Try These Fourth-Wall-Breaking Anime
Drone Video Takes Us Through the Sailor Moon Museum Exhibit