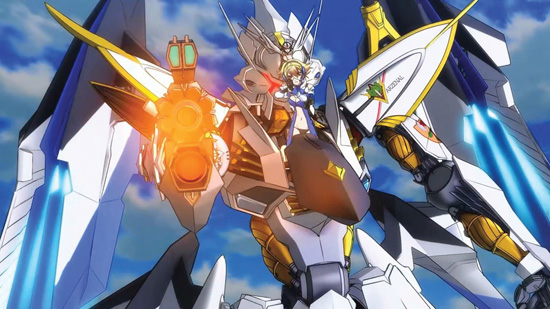 Have you ever come across a series so outlandish and laced with over-the-top insanity, yet fully aware of itself to the point of borderline genre parody? To make it better, imagine a show like this that somehow manages to be badass and actually fun. That seriously is the best way I can sum up the general feel of Sunrise’s 2014 TV series Cross Ange: Rondo of Angels and Dragons. This show came out of nowhere and was overloaded with enough action, innuendo, and explosions to keep people talking. But the surprising part is that it actually manages to be something exciting.

The series is set in a world where mankind has discovered the means of harnessing “Mana,” a mystical energy that has become an everyday part of life, forming the very foundations of civilization and technology. Wars and famine have screeched to a halt and in the Empire of Misurugi, people enjoy a long-lasting peace. At least until the day it shatters during the coronation of Princess Angelise Misurugi when her brother reveals that she is in fact incapable of wielding Mana. In this world, unfortunately, this is one of the greatest of all sins, rendering you a freak of nature and branding you with the title of a “Norma.” 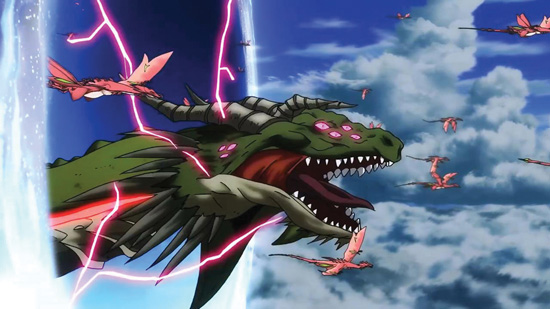 In trying to save her daughter, Angelise’s mother is brutally killed and her father executed. She is stripped of her title and birthright and thrown into captivity in Arzenal, a remote all-female prison for Normas miles away from civilization. Brutally humiliated by wardens and her fellow prisoners alike, Angelise is forced to learn the truth of her world: Humanity enjoys peace because the Normas are forced to become “mail-riders,” piloting giant Para-mail mecha and fighting hordes of dimension-jumping DRAGONs (or Dimensional Rift Attuned Gargantuan Organic Neototypes—Yeah, I know…) until they day they die. Becoming cold and embittered, Angelise takes the new name of “Ange” and is drafted into becoming a mail-rider, creating friction among her peers. She fights the hordes of DRAGONs, hoping to find an opportunity to return to her homeland and reclaim the throne.

That’s right. The literal summary of this series is a sci-fi fantasy women-in-prison film with transforming dragon-slaying robots.

While Cross Ange is far from perfect storytelling, fun is pretty much the order of the day for the series. Because for all the serious drama that takes place (including some very graphic and sexually charged character moments in the first four episodes alone), the bulk of the plot is so overdone it becomes hilarious. Whether it’s the revealing pilot suits or the Bikini Festival Episode, a lot of the major plot twists come off as incredibly laughable. Even the characters themselves notice this and break the fourth wall during next episode previews complaining about how lewd and humiliating certain scenarios are. 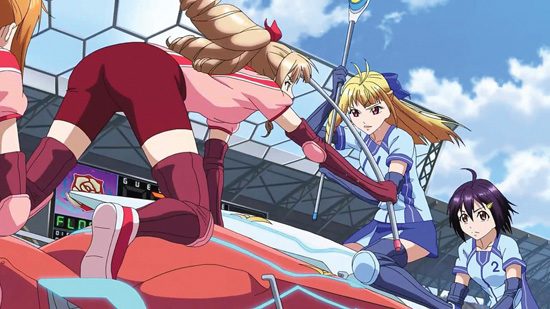 The interesting side effect of this is that when the show does take a turn in the second half, revealing major plot twists and having a major tonal shift, the previous shenanigans completely throw you off guard. Suddenly there’s major world-building, the characters grow up, the fanservice dies down, and some of the more intense physical and emotional struggles take place. In some ways it’s reminiscent of Code Geass R2 where the insanity was counterbalanced by the intrigue and drama. (Which isn’t totally surprising considering that several staff members from Code Geass worked on Cross Ange, but I digress.)

As completely over the top as Cross Ange gets, there are some still some stand-out elements. The transforming Para-mail mechanical designs by Code Geass and Gundam Build Fighters vet Junichi Akutsu are visually striking. Part air-bike, part winged knights, they really are unlike anything else in anime and complement the show’s attitude and edge. The cast is filled with absolute knockouts including Eri Kitamura (Super Street Fighter IV, Durarara!! x2), Houko Kuwashima (InuYasha, Martian Successor Nadesico), Mamoru Miyano (Tokyo Ghoul, Code Geass), and Yukari Tamura (Higurashi, Black Butler, Asterisk War). But major props are due for Nana Mizuki who plays Ange and also sings the main/insert themes. It’s Mizuki’s stellar performance that allows the character to take on an anti-hero role in the first half of the series. Coming from her past projects, especially something like Heartcatch Precure, it’s practically mood whiplash hearing her being cold, mocking, and selfish throughout. 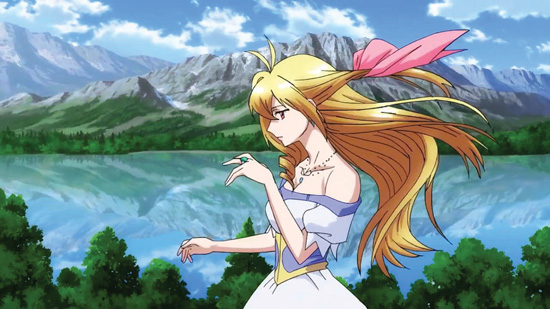 Cross Ange initially felt like something I wouldn’t end up liking. It came off as a guilty pleasure show, but eventually grew on me with ever notch turned on the dial before it came close to breaking it off. It isn’t controversial for controversy’s sake, nor is it out to be something mediocre that sells. Cross Ange is just what it is: ridiculously exceptional.