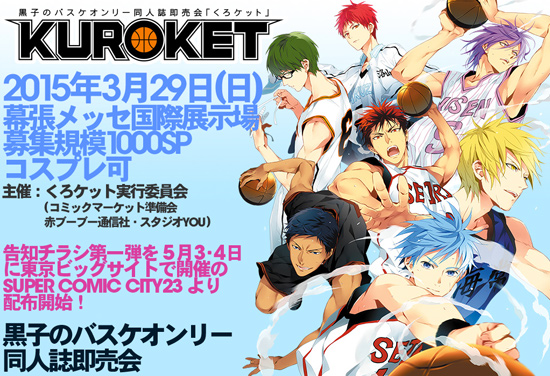 Excellent news out this week for fans of Kuroko’s Basketball (or as it’s officially awkwardly translated, The Basketball Which Kuroko Plays). Comic Market, the twice-yearly Tokyo doujinshi (fan comics) event will be holding a special extra event next year focused solely on Kuroko‘s.

As loyal Otaku USA readers may recall, Kuroko’s Basketball was the source of some major drama the last couple years, as events and places associated with Kuroko’s Basketball and its creator, Tadatoshi Fujimaki, were the target of death threats starting in 2012. Comic Market and other doujinshi events were forced to bar Kuroko’s comics, leading to huge disappointment and monetary losses.

Thankfully, the perpetrator behind the threats was found and arrested late last year, making Kuroko’s Basketball events safe once again. That’s why Comic Market has decided to throw a giant Kuroko’s-only event: as a kind of welcome back to all the fans who’ve been waiting patiently to show off their doujinshi.

The event, dubbed Kuroket, will take place March 29th, 2015 at Makuhari Messe convention center in Chiba in March. With 1,000 spaces available for artists and cosplay encouraged, it’s sure to be one giant dream come true for fans of the manga and anime.