Anime studio BONES has been cranking out quality anime for nearly two decades, so we pulled up some of their anime throughout the years for some quick hits from the timeline. 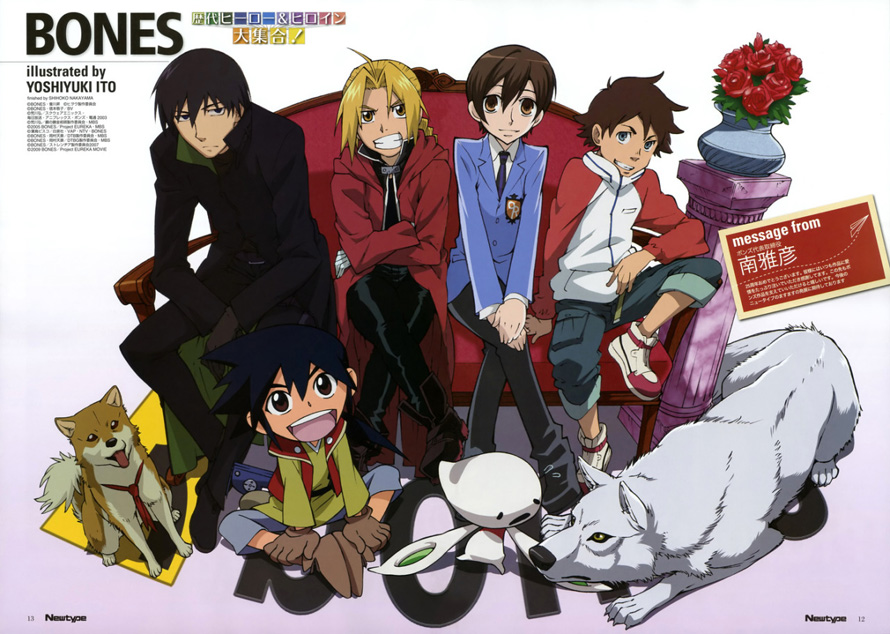 BONES hasn’t been around as long as some anime studios, but the company—founded by Sunrise staffers Toshihiro Kawamoto, Masahiko Minami, and the late Hiroshi Osaka (animation director on Escaflowne, Cowboy Bebop, and Fullmetal Alchemist: The Movie—Conqueror of Shamballa), who sadly passed in 2007 after a battle with cancer—has generated a bounty of fan favorites in the nearly two decades since its inception.

While there aren’t nearly enough pages here to cover every single notable title with the love they each deserve, we’ve plucked some unforgettable entries from the timeline for a quick overview, starting with the collaboration with Sunrise and Bandai Visual that kicked it all off when production began near the tail end of the 90s. 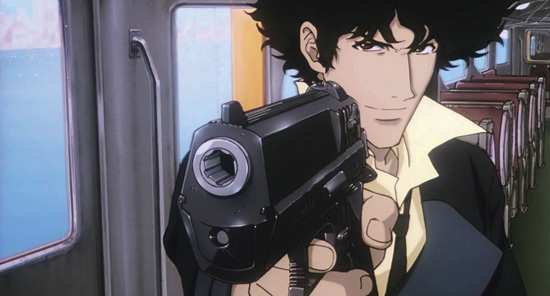 How do you improve upon a series that’s classic in nearly every single way? Better yet, how do you make a film that still fits within the confines of the show in a meaningful way?

Cowboy Bebop: Knockin’ on Heaven’s Door, or Cowboy Bebop: The Movie, did all of these things and more. Arguably one of BONES’ best productions, the film took place between Episodes 22 and 23 of the anime series, following a terrorist’s plans to wipe out all of the humans on Mars with an unknown pathogen.

Incorporating elements of the series as well as important narrative building blocks allowed even newcomers to the property to enjoy a proper action flick with likable characters. It also offered something a little extra for viewers to hold onto after hungrily devouring Cowboy Bebop as a whole. Producing the excellent song “Ask DNA” and some truly magnificent animation sequences, the Cowboy Bebop film is a testament to how you create movie adaptations of popular franchises, and remains one of my favorites to date.
– Brittany Vincent 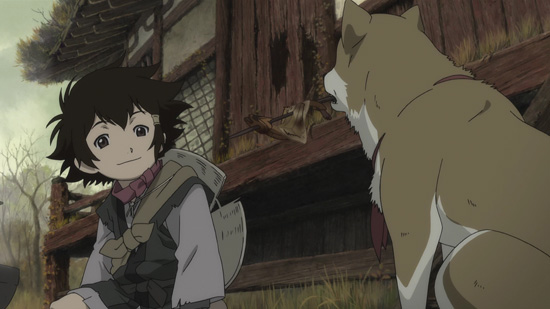 Although several of the titles mentioned in this article are fan favorites, one of the best things studio BONES ever made went mostly unnoticed by fans both in Japan and the US: the 2007 theatrical film Sword of the Stranger. It wasn’t built off of any preexisting material, and veteran animator Masahiro Ando (Canaan, Snow White with the Red Hair) had yet to establish himself as a director; this marked his debut. 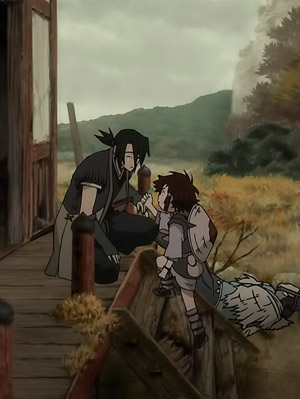 The characters are about as archetypal as can be for those familiar with classic Westerns, “jidaigeki” period drama samurai films, or—more likely—the modern genres derived from such. In medieval Japan, a wanderer with no name (referred to by others as “Nanashi,” which effectively means “No Name” or “Nameless” in Japanese) befriends a young boy and his dog who are being pursued by fanatical warriors. Seeking atonement for past deeds, Nanashi refuses to draw his sword—you’d be surprised at how effective a sheathed katana is at collapsing tracheas!—but eventually things get to a point where the film lives up to its title.

Such stellar background artistry, action choreography, music, and animation deserve attention. To date, it hasn’t really gotten any. Despite being released on Blu-ray and DVD in the US, Sword of the Stranger is currently out of print and isn’t streaming. Perhaps the awful truth is that audiences are now blind to the “art” of good action. Maybe action scenes are processed as “yep, they’re fighting” and nothing more, such that the technical mastery on display here is completely ignored or dismissed as insignificant. But I grew up on classic Hong Kong action cinema from Shaw Brothers and Golden Harvest. To someone like me, Sword of the Stranger needs to be brought up in any discussion of “the best anime action films of all time.”
– Daryl Surat 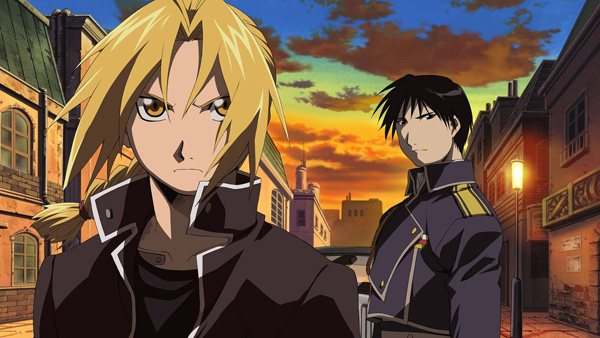 Yes, we could have easily just popped in two entries for Fullmetal Alchemist, but we recently gave the original 2003 anime its very own feature, so it’s back to Brotherhood for this blurb! There are a number of differences between BONES’ adaptations, most notably the fact that Hiromu Arakawa’s original manga was far from over when the first one had its 51-episode run. Once 2009 hit Arakawa was barreling toward the end of what would ultimately be a 27-volume series, and BONES’ second at-bat was looking to knock a direct adaptation of the whole thing out the park. 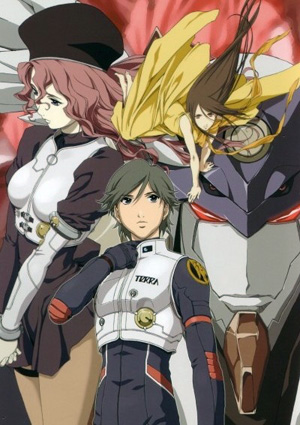 Over the course of 64 episodes we got a beautiful, exciting take on the story of Edward and Alphonse Elric, directed by Yasuhiro Irie—who previously helmed an episode of the aforementioned RahXephon, and directed Kurau: Phantom Memory at BONES and Code:Breaker at Kinema Citrus—with finesse.
– Joseph Luster

Neon Genesis Evangelion left its mark on droves of anime everywhere, but none so much as on the musically inclined RahXephon. From a haunting score to a terrifying race of invading aliens, RahXephon is all about a world that’s on the precipice of being destroyed, with a special “suit” (the Xephon) meant to save the human race from certain destruction, or “tuning the world.”

Even though the Mu are actually “multi-dimensional invaders” and not “angels,” every note of the series seems derived from Evangelion, but in an inspiring way rather than one that screams “copycat.” The mecha themselves aren’t even mechanical, but a certain set of biological, bizarre Dolems made out of clay. Where Evangelion thrills and then chills with its religious overtones and bizarre plot twists, RahXephon is intent on weaving a beautiful yet somber world where music absolutely seems like the enemy.

While it’s usually very quickly written off as just another “copycat” that steals its ideas from another successful series, it’s not like that at all, and should be praised for expanding upon many of the ideas and foundations laid by Evangelion.
– Brittany Vincent 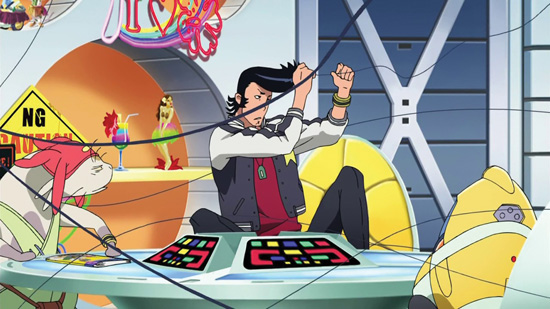 Whether you love or hate its occasionally nonsensical and recursive approach to narrative, Space Dandy was absolute heaven for animation fans. With Cowboy Bebop’s Shinichiro Watanabe on board as general director and Shingo Natsume (One-Punch Man) directing, anime fans were already looking forward to a wild space ride, and the end results were a who’s who of anime having as much fun as possible behind the wheel. Some of the many highlights included episodes directed by Sayo Yamamoto (Michiko & Hatchin, Lupin III: The Woman Called Fujiko Mine), Eunyoung Choi (episodes of Ping Pong and The Tatami Galaxy), Michio Mihara (assistant animation director on Satoshi Kon’s Paprika), and, of course, the inimitable Masaaki Yuasa (Mind Game, Ping Pong, Kaiba). For an experimental series that also manages to hold on to its promise of thrilling misadventures in the far reaches of the galaxy, this dandy guy in space is absolutely worthy of sporting such a rowdy pompadour.
– Joseph Luster 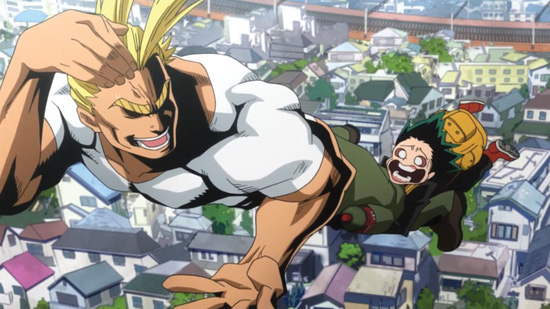 Kohei Horikoshi’s My Hero Academia was pretty much screaming for an adaptation the moment the first handful of chapters debuted, and BONES seriously delivered this year. The story is a classic in the world of shonen manga, with a relatively pathetic but determined protagonist in the form of Izuku Midoriya. Actually, it’s really the way he’s perceived by others that’s pathetic, because Izuku might just be one of the most driven leads in anime. Once he runs into world-class superhero All Might, he takes on a brutal training regimen with barely a whisper of complaint, all for the sake of realizing his own superheroic dream, lack of powers be damned.

BONES takes Horikoshi’s manga and breathes a world of color into it, not unlike the bold, primary pop of the collected volume covers. One of the strengths of the original manga is its varied character designs, and the adapted designs by Yoshihiko Umakoshi (Mushishi, Grappler Baki OVA, Berserk) take them to the next level. In a world full of big-name shonen adaptations that don’t exactly get the best treatment when it comes time for animation, My Hero Academia is a fantastic current example of BONES’ strong pedigree.
– Joseph Luster

This story appears in the Summer 2016 issue of Anime USA Magazine. Click here to get a print copy.

[Review] The Other Side of Secret
[Review] Kizumonogatari Part II: Nekketsu