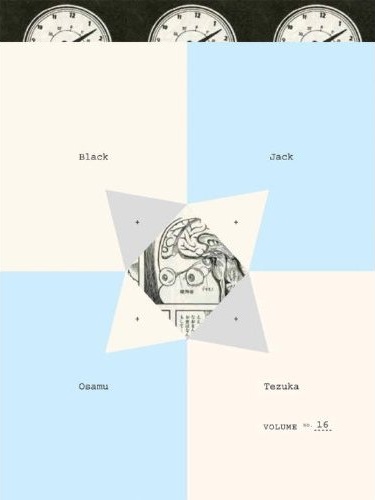 The “Demon of Surgery” is back in Vertical Inc.’s latest volume of Black Jack and, unfortunately, there’s only one more to go after this one. Don’t let that get you down, though, as volume 16 packs nearly 350 pages of unlicensed surgical action into yet another sleekly designed and classy book. If you’re still not reading this series yet, you should be.

One of the nice things about a series full of self-contained stories like this is that I can talk about specific details without having to worry about spoiling some grand overarching plot. Of course, there are common threads throughout the chapters, and it helps to have read previous volumes for more info on the lives of Osamu Tezuka’s layered characters, but these stories are, for the most part, clever and engaging snapshots.

Some are lighthearted and fun. Some are heavier than others. Even a single volume holds great variety, and this one is no exception. One of my favorites here is a brief tale called “I Want My Brother Back!” I may be biased due to my love of tokusatsu (special effects) TV shows like Ultraman, because costumed heroes are the core of the story here. Young schoolboy Yukio gets teased plenty because his older brother plays the villain “Gholas” on the show Big Mask. His lumpy, mashed-potato-looking costume gets walloped on a weekly basis, and this begins to take a toll on the actor, who is experiencing odd pains and itches.

As it turns out, those pains quickly swell into something much more alarming, as his legs deform like putty, looking almost exactly like those of the hideous villain Gholas. The only reliable help comes from the precision hands of the mighty Black Jack, who must also help convince Yukio that his older brother is a hero at heart.

Beyond that there are stories of unrequited love, bullying, xenophobic villagers, quack-proof cancer hunting machines and more. But the real show-stopper is the final story, “A Passed Moment,” clocking in at a heftier-than-average 93 pages. This tale has everything I love about Tezuka’s Black Jack writing, highlighting a baffling medical issue that even manages to confound the unconfoundable doctor. When Black Jack steps into a cab, his driver, Kenpei Imamura, immediately reacts, forming a mark on his face similar to Black Jack’s own iconic surgical scar.

It turns out Imamura has had this problem for a long time—scars on others cause welts to flare up in the same place on his own body—and thought he had it under control before Black Jack popped into his life. Complicating matters further, Imamura is also plagued with nightmares of a life he doesn’t recall, and the doctor is compelled to operate when bullet wound-like birthmarks on his back begin to bleed profusely. Whatever is causing Imamura’s strange reactions has deep past implications, and Black Jack is willing to travel far and wide to put a seal on this ever-tangling mystery.

16 volumes in and Black Jack remains as engrossing as ever, its titular doctor still holding a tight grip on the web of intrigue that surrounds his true intentions. We may never fully understand what motivates this unparalleled surgeon, but the chronicles of his adventures are worth collecting and reading, and are recommended heartily to all.