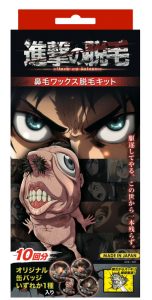 Eren, Mikasa, Armin and the whole Attack on Titan have faced some pretty hairy situations—but nothing like this.

Attack on Titan branding is being used to help sell kits for removing unwanted nose and body hair out now from Japanese retailed Don Quixote.

The kits include exclusive buttons featuring Eren, Levi, Levi and Kenny, and a titan with some serious nose hair issues.

That fellow also seems to be the main mascot for the ad campaign, which includes a video released on YouTube. The text in the ad puts a playful twist on famous lines from the series, including: “I’ll kill every one of these unwanted hairs!”

The product, by the way, is called Attack on Datsumo, which means “hair removal.”

Attack on Titan season 3, by the way, hits screens July 22.