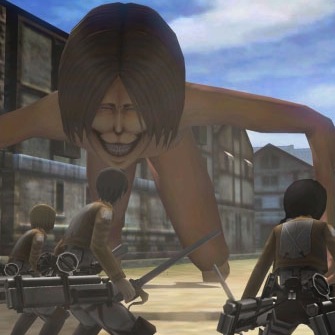 Earlier this month we posted about Atlus planning to localize the Attack on Titan game on Nintendo 3DS in the west. Despite being announced on April 1, it thankfully wasn’t an April Fools’ Day gag, and it’s currently set to arrive in North America and Europe this May.

The western release of Attack on Titan: Humanity in Chains is based on the late 2014 update that brought some improvements—including compatibility with the New Nintendo 3DS C-stick—to Spike Chunsoft’s game. Now Atlus is here with a trailer showing off some of the gameplay features.

Based on the popular manga and anime series, Attack on Titan: Humanity in Chains is a download-only title for the Nintendo 3DS. Take on the role of Eren Jaeger, Mikasa Ackermann and other familiar faces from the Scout Regiment to defend the last remnants of humanity. The game has local and online 4-player co-op, and supports the New 3DS XL system’s C-Stick (and the Circle Pad Pro).

Don’t forget, if you feel like a little Attack on Titan refresher on the go, the first two episodes of the anime are available for free on the Nintendo 3DS eShop through June 30.