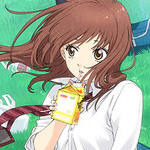 Ao Haru Ride, Production I.G’s adaptation of the shoujo manga by Io Sakisaka, is set to make its debut in July. The series is being directed by Ai Yoshimura, who previously directed My Teen Romantic Comedy SNAFU and worked on Daily Lives of High School Boys as a storyboard artist and episode director. Kimi ni Todoke‘s Tomoko Konparu handles series composition.

With the series nearly ready to air, a new minute-long commercial is here to promote it. See the latest preview below.

Here’s the synopsis of the manga via Baka-Updates:

Yoshioka Futaba has a few reasons why she wants to “reset” her image and life as a new high-school student. Because she’s cute and had a demure personality she was ostracized by her female friends in junior high, and because of a series of misunderstandings and mishaps, she couldn’t get her feeling across to the one boy she has always liked, Tanaka Kou.

Now in high school, she is determined to be as unladylike as possible so that her friends won’t be jealous of her. While living her life this way contentedly, she meets Tanaka-kun again, but he now goes under the name of Mabuchi Kou. He tells her that he felt the same way as she did when they were younger, but that they cannot go back. Will Futaba be able to continue her love that never even started from three years ago?