The Kickstarter stories just don’t stop ‘round here. It’s about a year since we reported on the launch of Production I.G. launching their Kickstarter project to fund their short Kick-Heart. At the time, it seemed like a totally wild and crazy idea.

Since then, we’ve seen various anime and manga-related projects from both side of the Pacific: anime studios like Trigger have successfully funded their own projects, and licensors over here have raised the funds to release DVDs, Blu-rays and manga. 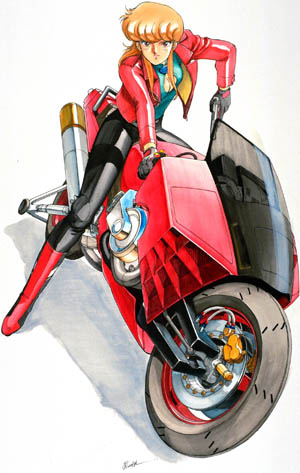 Honestly, there are so many projects these days, it’s come to the point where we can’t cover them all. But there’s no way we can pass up talking about this one.

That’s because this Kickstarter project is for the potential high-def release of none other than the one, the only, the legendary Bubblegum Crisis.

Some of our younger readers might not be familiar with the show (heck, even its remake TV series is 15 years old!), so, a quick introduction: Bubblegum Crisis is the story of a group of kickass, armor-clad women called the Knight Sabers, who, when not playing in punk bands and working as aerobics instructors, protect Mega Tokyo against rogue boomers – androids who have become deadly.

The series, which drew a lot of influence from American films like Blade Runner, The Terminator and Streets of Fire, struck a chord with U.S. fans when AnimEigo released it the first time around: for many, it was the show that sparked interest in this whole anime thing to begin with.

So basically, this Kickstarter is a big deal, man! As of this writing, the project is in draft mode, with questions and comments being fielded by AnimEigo founder Robert J. Woodhead, but so far, the deets look like this: $80,000 is the goal, which will guarantee the release of the whole 8-episode series in HD, plus the famous music videos. 45 dollars is the minimum pledge, which gets you the whole package. Not too shabby.