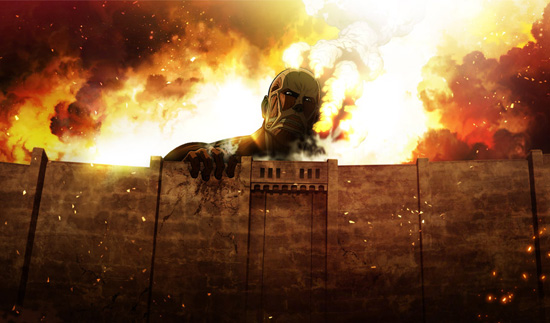 This season already started with a handful of much-talked-about anime, but none were perhaps as hotly anticipated as Attack on Titan (Shingeki no Kyojin). Production I.G subsidiary Studio Wit takes up the task of adapting Hajime Isayama’s popular Attack on Titan manga and, judging from the first two episodes, it should be a pretty wild and impressively animated ride.

I enjoyed what I’ve read of Isayama’s manga—you can read our review of volume one for more on that—but it does have its issues. The art, for one, can be pretty awkward. Oddly enough, I immediately found the character designs and overall style more suited to animation, and Psycho-Pass‘ designer Kyoji Asano really handled them well. They maintain Isayama’s distinctive look, but through the filter of a talented team that was able to bring them to life more naturally.

Speaking of animation, we might as well get that out of the way. When Attack on Titan is on, it’s on full blast. The first two episodes haven’t made it to the point where our lead and his friends are actually fighting the Titans head-on, but the action showcased in these opening chapters is still breathtaking. When episode one kicked off with a rousing, zip-lining fight, I thought for a moment, “this is the kind of stuff I used to show off when I wanted to get someone into anime.”  It’s the type of fluid, beautiful work you want to rewind a few times to soak it all in.

As with any good story, of course, there are peaks and valleys. Don’t let pulse-pounding trailers get your expectations twisted. Thankfully, the story of Attack on Titan is one worth settling down with. After humanity was wiped out by mysterious, towering humanoids known as Titans, they eventually rebuilt with preservation in mind. Multi-walled defenses protect what’s left of the dwindling population, but all attempts to expand beyond the walls have failed.

While things are indeed grim, life goes on, and we set our focus on protagonist Eren Yeager. Sadly, Eren is one of many to witness the shocking return of the Titans, as a particularly tall one—towering above the rest at about sixty meters—manages to break through the outermost defense, Wall Maria. Eren and others panic as smaller Titans make their way into town, and tragedy strikes. This all spurs Eren to fight alongside the soldiers who defend humanity, battling Titans with the help of the grappling and zip-lining Three-Dimensional Maneuver Gear. 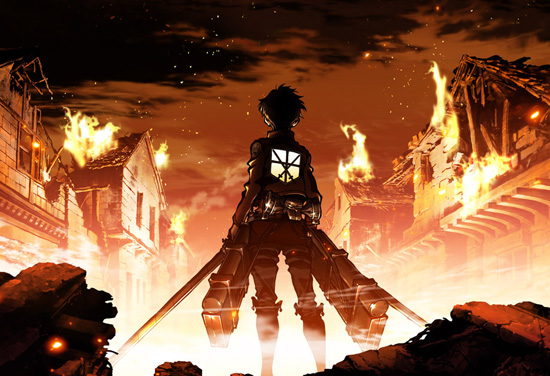 Attack on Titan‘s unique style of combat looks like it’s really going to pay dividends here for fans of animation. Other than a few inside-out-boy exceptions, Titans are mostly just giant naked people lumbering around, but Wit and director Tetsuro Araki (Death Note) do a good job of having them project a certain menace, even when they’re not actually picking folks up and devouring them whole.

The first two episodes, both of which are available now via both Crunchyroll and FUNimation (another sign as to how much of a hot property this one is), should give most people a good idea as to whether they’ll want to keep up with this one. I’d wager the best is yet to come, though, so go ahead and dig in as soon as you can.