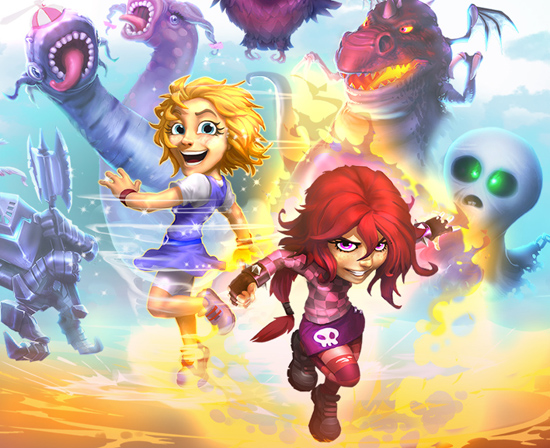 There comes a time in a man’s, or woman’s, life in which one must step out of the shadow of his, or her, forerunners. Today is that time for our fair Giana. It was only about a year ago that Otaku USA took a look at the US release of Giana Sisters DS, a nostalgic little 2D romp on Nintendo’s geriatric DS handheld. But, just as the DS bowed out of the limelight as the 3DS ascended to power, things have changed for Giana, too. Perhaps it can be attributed to the soul-searching that resulted from the unfortunate, untimely passing of the father of the Giana Sisters, Armin Gessert, and the subsequent bankruptcy of Spellbound Entertainment, the German development studio he founded that introduced Giana to a new generation, among other accomplishments. The remaining members of Spellbound could have just as well closed the door on that chapter of their lives, but not inclined to let Gessert’s legacy fade into memory, the key figures of Spellbound founded a new game development team by the name of Black Forest Games, and acquired all of Spellbound’s former assets. Giana was to shine once again, quite possibly brighter than ever.

No longer content as a mere Mario doppelganger, Giana set aside her retro leanings and blazed forth on a brave new path, sporting an identity all her own. However, that’s not to say that all that was familiar has been cast to the wolves. Established Giana fans will find comfort in many returning elements in Giana Sisters: Twisted Dreams. Despite the new 3D coat of paint, the latest entry of the series still plays as a classic side-scrolling platformer, with all the hopping and bopping we’ve loved in the genre since the 1980s. The story is just as paper-thin as ever, with a mysterious portal randomly appearing in the bedroom of the sisters, which then, predictably, swallows up Maria (who sees further misfortune at the hand—and stomach—of the portly dragon Gurglewocky), prompting Giana to literally dive headfirst into adventure. Giana soon discovers that the alternate world she’s been plunked into is even stranger than it first appears, as a simple shift in Giana’s spunky attitude causes the land itself to transform before her very eyes! 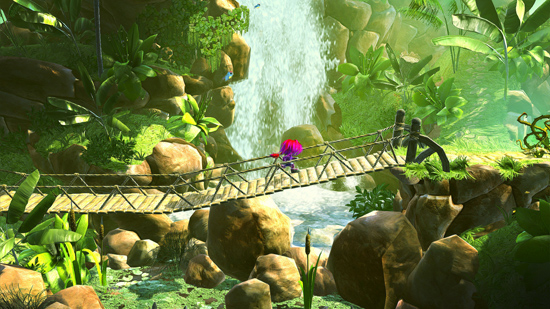 And with that, we have been brought to the core concept of Giana Sisters: Twisted Dreams. Like in Giana Sisters DS, Giana comes in two flavors—Cute and Punk—but she’s none too enthused about the idea of becoming a tasty snack like her sister. It’s going to take all she’s got to rescue Maria, so, rather than reserving the Punk form to the role of a power upgrade, a la Fire Mario, Giana can change at will, akin to a character swap in Donkey Kong Country, to use any and every trick up her sleeve at a moment’s notice. As she shifts back and forth, the world morphs with her, from a nightmare world to contrast with happy-go-lucky Cute Giana to a whimsical fairytale land that gets under Punk Giana’s skin. Pudgy owls transform into horned demons, park benches reshape into coffins, and charming cottages turn into spooky crypts, just to name a few. There is nary an object that isn’t rendered in two unique, thematic forms, and it’s easy to lose yourself in appreciation of, or occasional distraction from, the detailed, imaginative landscapes. There’s even a delightful Jell-O-like wobble as the terrain fluidly transitions from one to the other. 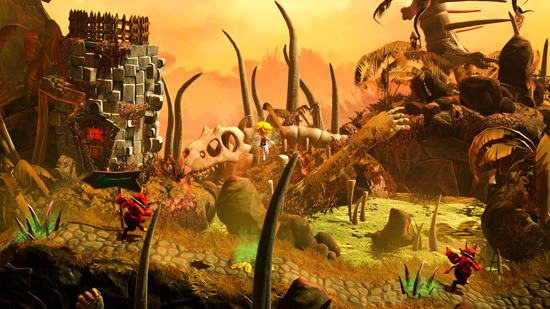 The practical purpose behind all this is that, to reach the end of a stage, Giana must manipulate the land to suit her needs. Platform preventing your progress? Scare it into recession with a gnarly Punk glare. Bridge blocking your way to what’s below? Watch it crumble away in Cute Giana’s decaying world of horrors. As you alter the physical roadblocks, Giana must also take advantage of the specialty of each personality. While Cute Giana likes to gleefully twirl and glide to her destinations, Punk Giana has a mean fire dash that’ll blast through baddies and blocks alike, and each of these abilities are employed in a multitude of terrain-specific maneuvers, from floating over fan currents to bouncing off springs. It takes a slight bit of time to get the hang of things, but once you’ve adapted to the controls and the borderline wonky rules of the universe (like transforming to Punk Giana mid-twirl), you’ll soon find yourself twisting back and forth with finesse.

And you’ll need every bit of that honed skill and confidence to see your way to the end. Giana Sisters: Twisted Dreams has an unabashedly “hardcore” difficulty level, befitting of a game with old school roots. The irony is that the game actually includes a “Hardcore” mode, among a handful of other special challenge modes, but make no mistake, the standard difficulty alone is enough to make today’s pampered gamers cry many manly tears. 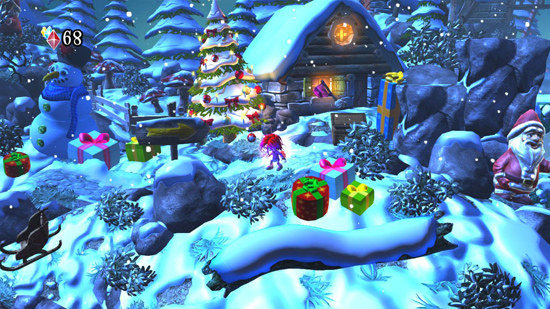 In an effort to alleviate these woes some, Black Forest Games has given players a little bit of leeway in the manner of how progression is made. On top of locating the end goal of each stage, players must earn a certain number of stars to unlock each of three boss levels. Stars are acquired based on both the number of gems collected in a stage—yellow by Cute Giana, red by Punk, and blue by either—and how few lives were squandered. So if you hate collecting, practice makes perfect, but if you can’t help but blow through lives as if Giana is popping off a factory line, those gems may be your ticket out.

This balance is structured around a system that grants unlimited continues at the ample checkpoints scattered about each stage. It’s not uncommon to rack up dozens of deaths before a level is completed, but with the ability to repeat tricky spots as much as necessary and the fact that your gem tally remains through loss after loss, determined players can eventually overcome any obstacle, no matter how devious. The only niggling flaw is that a hard save is only produced upon clearing a stage, and given the excessive length of most levels, even before factoring in time spent on retries, it’s odd that the player can’t stop at and later resume from a checkpoint, considering the unlimited continues negate any advantage that would otherwise be created. Giana Sisters: Twisted Dreams could learn a lesson from Giana Sisters DS in this regard, with its stages that were much shorter but far greater in number. The length of levels hurts both the convenience and replay value of Giana Sisters: Twisted Dreams, but it’s an issue that can be overlooked by those who devote a decent chunk of playtime to each gaming session. 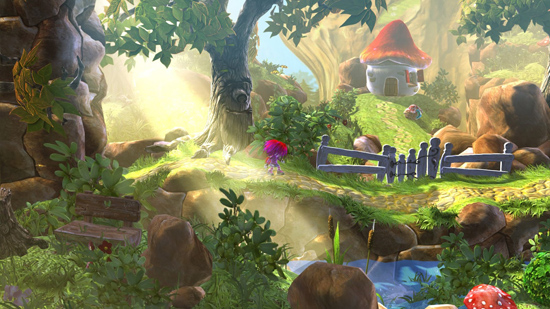 Rounding out the package, Giana Sisters: Twisted Dreams brings back series’ mainstay and legend in his field, Chris Hülsbeck, for composition duties. Frequent compatriot Fabien del Priore also joins the fold, but the shocker in the musical lineup is the inclusion of Swedish chiptune metal band, Machinae Supremacy. Complementing the dual nature of the game, two entirely different renditions of the soundtrack have been arranged to match each form of Giana—one with the distinctive pop melodies custom to the Giana Sisters series and the other featuring balls-to-the-wall rock to pump up the action. You can’t go wrong with either, and unless you fuss with the settings to stick with one the whole game through, you’ll get plenty of both, as the game plays both soundtracks simultaneously, with one always silently hidden in the background, which produces a seamless, dynamic transition when switching from Cute Giana to Punk and vice versa.

It’s almost hard to believe that such a polished, finely-crafted platformer was once underfunded, rejected by publishers, and at risk of being shelved indefinitely. But thanks to the brilliant phenomenon that is Kickstarter and the optimistic backers who chose to support “Project Giana,” we can now hold Giana Sisters: Twisted Dreams in our hands, or at least store it lovingly in our digital game libraries. For a game that looks toward the future as much as it respects the past, it deserves as much.