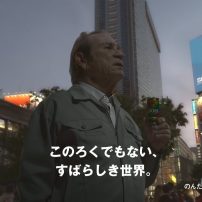 If you’ve been following the news out of Japan, you know the Heisei era, which began in 1989 with the ascension of Emperor (now Emperor Emeritus) Akihito, ended May 1, 2019, as his son Naruhito took over.

Many reports, TV shows, articles and lists were produced to look back on the 30 years that were, but perhaps none was as charming as this Boss Coffee commercial starring Tommy Lee Jones as an alien in the form of Tommy Lee Jones.

Japanese commercial fans will recognize the long-running schtick—Jones has been a Boss spokesman for years—but this one really pulls on the heartstrings. The alien, who has taken the form of Jones in order to better understand human beings, looks back on Heisei and concludes that while humans are strange, irrational creatures, we sure do work hard—and make some good coffee, of course.