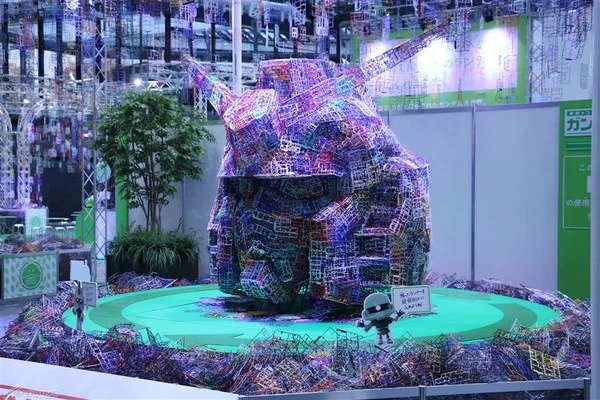 Bandai Namco Group sounds really intent on helping with sustainability, and they’ve tapped their enormously successful Gundam franchise as a vehicle to use in this process. One of the things they’ve been up to is asking people to donate their runners, which are the plastic attachments to their plastic Gundam models. All the Namco stores in Japan have put in a recycling box, and the company has been very vocal on wanting those runners recycled.

And people have been listening. During a month-long campaign, about two thousands pounds of runners were recycled! And what do you suppose Gundam is doing with all those runners?

Well, they’ve decided to repurpose them to make a Gundam head. This head was revealed at the “Gundam Recycle Strategy” campaign over the weekend. It’s two meters tall (about six and a half feet), which makes it about the right size of a real Gundam head, if Gundam were real. It took about 3,000 runners to make this statue.

Gundam Base Tokyo and some other stores have been offering recycled “EcoPla” plastic model kits, plus giving out booklets that teach people about recycling. This is all part of the The Gunpla Recycle Project, which is the brainchild of the groups Bandai Namco Holdings, Bandai Spirits, Bandai Logipal and Bandai Amusement. They’re thinking that within a year they ought to get about 20,000 pounds of plastic recycled.

This goes beyond that, though. Bandai Namco Group has made it clear they want to get a 35% reduction of carbon emissions by the new decade. On top of that, they want net zero emissions by the time 2050 rolls around. They want to get involved with technologies that save energy and are sustainable, and use these technologies throughout their business, whether it be an office or an amusement facility.