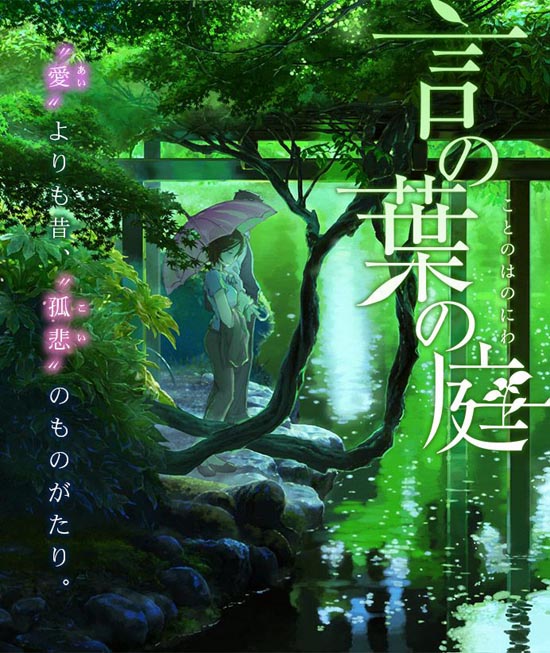 Fans of one-man anime movie monster Makoto Shinkai found an unexpected present under the tree this year. Shinkai, the director of Voices of a Distant Star, 5 Centimeters Per Second, and Children Who Chase Lost Voices announced via his official website on Christmas Eve that he’s working on a new anime film titled Kotonoha no Niwa, or “The Garden of Words” (no official English title has been announced as of this time).

In a blog post accompanying the announcement, Shinkai wrote that the film — due in Spring of 2013 — would be the first “love story” he’s created, adding he wants to incorporate feelings and emotions in Kotonoha that he was unable to work into his previous films. But this isn’t just a love story. It’s an oldschool love story. How old? How about “before the word ‘love’ existed”?

“This is about the idea of ‘love’ that existed in Japanese spoken language before the introduction of Chinese characters,” writes Shinkai, detailing the metamorphosis of language that occurred over time, with “love” or “koi” being written not with the character used today, but with two characters whose combined meaning roughly comes out to “solitary sadness”, and also, of course, predates the importation of the western concept of love to Japan.

Despite the history lesson, Shinkai emphasized this is not a historical film, and it takes place in the present day, much like 5 Centimeters Per Second. “This is a story of a love before love, an emotion of longing for someone that can only be felt in solitude.”

Kuroneco: Maids and Beers in Nakano
On The Shelf – January 2nd, 2013