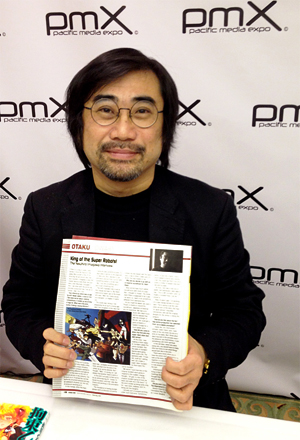 When we interviewed legendary director Yasuhiro Imagawa for our February issue, little did we expect we’d have the chance to speak to him again a scant few months later. That’s what happened, though, at this weekend’s Pacific Media Expo in Los Angeles, where Imagawa was visiting as a guest of honor.

“My great teacher, Yoshiyuki Tomino, the creator of Gundam, taught me something very important,” began Imagawa, fielding our question about why so much anime seems to repeat itself season after season: “if you continue to make a copy of a copy of a copy, eventually the image degrades to nothing.” But, he explained, television anime is a product, and must be engineered to sell to an audience wary of change. He mentioned that every few years a series overcomes the limitations of the mold and becomes truly unique. It’s up to creators to inject their own personality into their work to make it stand out, he said, laughing, “sometimes fans think I put a little too much of my own personality in.”

Imagawa is probably best known in the US for directing G Gundam, the first Gundam series to take place outside the original “Universal Century” timeline and to adopt a wildly different style and tone. We asked whether he feels another Gundam series will ever be able to take such bold twists.

“Gundam has been evolving over the years, but creators do want to retain that basic element of taking place on the battlefield,” he noted. G Gundam is still the lone exception, taking place in a tournament setting, for which he took a lot of heat at the time. He noted his happiness that G Gundam was so well-received in America, where perhaps Gundam fans were more flexible about the series breaking the “rules” of the universe.

In the end, he said, “I’m glad G Gundam didn’t get sucked into that big Gundam gravity well.” 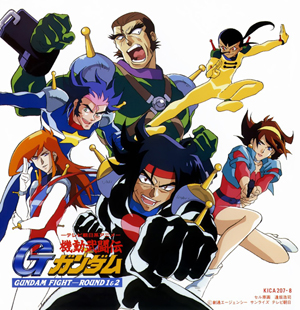 Though his most famous works are giant robot shows, Imagawa has had a varied career, including writing the screenplay for the recent Bartender, a more relaxed series about the art of mixing the perfect drink. What inspired Imagawa to become involved in the production?

“Well, I like drama stories. And I like alcohol,” he laughed. He noted that Bartender’s extremely limited animation, mostly just mouth movements, was intentional, as the series is concentrated largely on conversation.

“To be frank, we only considered the very best of the best voice actors,” he explained, “the concept wasn’t animation to be watched. It was animation to be listened to.”

Finally, we asked Imagawa about the way anime is sold in Japan today versus in the heyday of OVAs like his own Giant Robo. He sees the production of these direct-to-video releases decreasing. Today’s model, in comparison, is to air a series on TV first as a kind of preview, then sell the DVDs. Wistful, Imagawa noted that because today’s DVDs are packaged with so many extras, the animation itself can feel like a giveaway.

“Anime has become almost disposable, like a seasonal product,” he said. “It can hurt seeing something you created selling used for a few yen on Amazon. Us creators should strive to make anime that people will hold onto and love for years.”

Tiger & Bunny to Return as Two Films in 2012!
The Live-Action TEKKEN Film