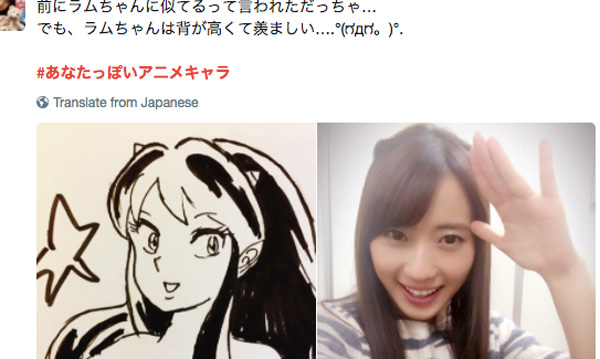 Twitter is a social media service so perfect for Japan, it seems almost like it was created for the country. Take its 140-character limit: while in English it can feel, well, limiting, the compact nature of Japanese means users can fit a ton of content into one tweet.

That includes, for example, both a hashtag that translates to something like “the anime character you most resemble” and a mess of reasons why.

That happens to be what’s trending on Japanese Twitter right now, with users offering up the anime characters they resemble both physically and in terms of personality.

The hashtag is inspired by a simple web app on site Shindan Maker, into which you enter your name to find out what anime character is most like you (the app works with English names too, by the way).

Some Twitter users are tweeting their results straight, while others are ignoring the Shindan Maker app and posting the characters they feel like personally.

The hashtag in Japanese, by the way, is #あなたっぽいア二メキャラ, and the web app for finding out what anime character you are is here.

Apparently, I am a cute pig from a 90s magical girl series called Tonde Burin. Wonderful.

View all posts by Matt Schley
Subtitled Trailer for In This Corner of the World U.S. Release Streamed
Devilman Crybaby Anime Serves Up Intense Visual