Wages an Issue at Vocational Facility Where Disabled Work on Anime 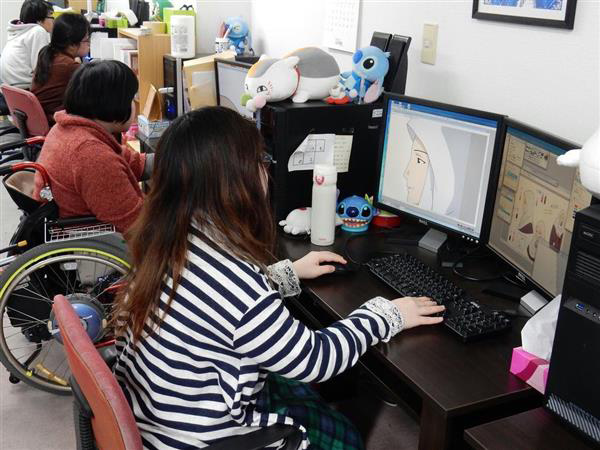 A vocational facility in Kyoto at which several mentally and physically disabled people help to create anime has been garnering praise – and criticism – reports Japan’s Sankei News.

Mayuko Kumagaya, a 25-year old born with cerebral palsy, is one of the anime workers employed at P&P. She told Sankei, “When I see something I worked on on TV or the net, I think, ‘I’m really working.’ When I see my name in the credits, I feel incredibly happy.”

The workers at the facility use special software to correct lines and paint digitized key frames. The training takes from 6 months to one year.

Noting his satisfaction with the work, Anime R’s Moriyasu Taniguchi told Sankei, “it doesn’t matter whether they’re disabled or not. They do great work.”

But because of the way these vocational facilities were set up by the Services and Supports for Persons with Disabilities Act, the wages at P&P are another matter.

Because there is currently no provision in the law to separate simple manual labor from the highly specialized anime work Kumagaya and her colleagues are doing, the daily pay for someone who works from 10am to 4pm is ¥800 – less than eight dollars. That adds up to about ¥16,000, or about $150, a month.

Clearly, says Sankei, a resolution to this wage issue is needed.

View all posts by Matt Schley
Young People, Mamoru Oshii Does Not Care for Your Anime
Official Canada Twitter Account Asks Which Pokemon is Most Canadian