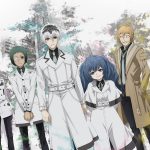 According to the latest issue of Weekly Young Jump magazine, two more voice actors have been added to the cast of the upcoming Tokyo Ghoul:re anime. Based on the manga by Sui Ishida, the anime’s new additions are Yu Kobayashi (Sasha in Attack on Titan) and Mamoru Miyano (Light in Death Note).

Kobayashi will play Kanae von Rosewald, while Miyano steps back into the role of Shū Tsukiyama.

Tokyo Ghoul:re premieres this April. Viz Media publishes the manga in English and describes it like so: