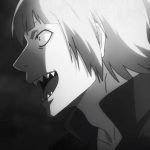 Well, they weren’t kidding around when they said Tokyo Ghoul had an important announcement on the way. That announcement turned out to be a TV anime adaptation of Sui Ishida’s sequel manga, Tokyo Ghoul:re.

Right now they just have lead voice actor Natsuki Hanae listed as returning, so we’ll have to wait for more information on the rest of the cast and staff. In the meantime, here’s the teaser promo.

The first volume of the manga is coming out in English courtesy of Viz Media on October 17. Here’s their synopsis:

In TOKYO GHOUL: RE, the Commission of Counter Ghoul is the only organizationfighting the Ghoul menace, and they will use every tool at their disposal to protect humanity from its ultimate predator. Their newest weapon in this hidden war is an experimental procedure that implants human investigators with a Ghoul’s Kagune, giving them Ghoul powers and abilities. But both the procedure and the newly formed Qs Squad are untested. Will they become heroes…or monsters?!