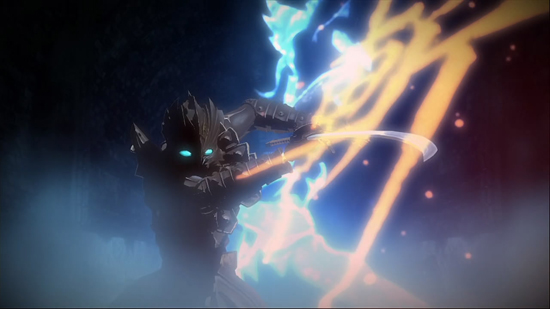 Nobody quite expected Tiger and Bunny, a recent Japanese animated TV series about American-style superheroes, to be the big hit anime series of 2011. Where had Japan been hiding the people who could make such a show? For the answer, let’s look back in time about six years.

A single ant crawls on the ground. The camera cuts and zooms to reveal a swarm of CG ants scurrying about. “To what purpose is this which I am seeing?” you wonder for the nearly half a minute’s time this takes, before all is revealed: the ants corral themselves into a formation of Japanese kanji characters translating to “DIRECTED BY KEIICHI SATO” before summarily bursting into flame.

Such pompous audacity that most would call pretentious arrogance of the highest magnitude heralded the directorial debut of the man who would later go on to head up Tiger and Bunny; a man primarily known for his work as a mecha designer and idea man, having previously conceptualized another American superhero-inspired anime, The Big O. But the scene in question comes from a title that has been largely dismissed among dedicated anime fans in the USA: Karas. That’s a shame, because much like how Die Hard is the best Christmas movie of all time, Karas is the greatest Christmas anime OVA ever made. 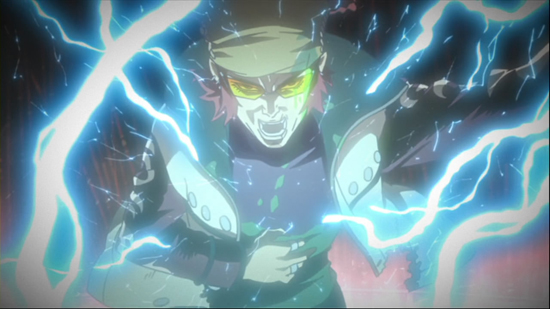 Karas is a six-part OVA series commissioned by the legendary anime studio Tatsunoko Production to commemorate its 40th anniversary. But rather than being about an American-style superhero, Karas is distinctly about Japanese-style ones. Typically confined to the realms of live-action “special effects” aka “tokusatsu” works, many of the Japanese superhero conventions were established by the late Shotaro Ishinomori, creator of such titles as Kikaider, Cyborg 009, Kamen Rider, and the “super sentai” genre (think Power Rangers) to name but a few. Karas is a “dark hero” along the lines of Ishinomori’s Skull Man, featuring bloody violence and less child-appropriate content than the usual fare. And it happens during Christmas time, at that!

The first episode of Karas was released in 2005, which marked something of a mini-revival of the “dark hero” concept. A sanitized yet manga-faithful adaptation of The Guyver followed, along with a live-action series GARO, which is very similar to Karas in its tone and presentation. The sixth and final Karas installment was released in 2007, which heralded the release of an anime adaptation of The Skull Man, also well worth checking out. But as it stands, the only title with enduring success of the bunch was GARO, which has gotten various sequels and spinoffs as recently as… well, right now as of this writing! If you’re currently following GARO: Makai Senki, then chances are pretty good you’ll like Karas!

Despite giving me some of my personal favorites such as Baoh and the unforgettably tremendous and wonderful Apocalypse Zero, the “dark hero” concept never fully caught on. Given that the primary objective of such programming is to sell toys such that the typical audience for Japanese heroes is children… and mothers of said children/ladies interested in implied male-male romance between host club-like actors… I understand. Perhaps they’re “too American-style hero” in their depictions of violence/sexuality for the Japanese superhero fans, and “too Japanese-style hero” with their “henshin” transformation sequences, battle recitations, and kabuki-inspired posing for American superhero fans? Whatever the case may be, most aficionados of Japanese pop culture in the US at this point only know of the existence of Karas by way of his being a selectable character in the fighting game Tatsunoko vs Capcom: Ultimate All-Stars, and even there he’s not exactly a popular choice. 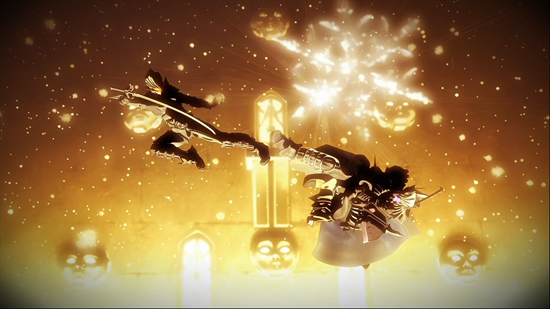 Karas is set in “present-day” Shinjuku, Tokyo where, unbeknownst to the general public, yokai —the traditional Japanese mythological monsters—continue to exist. Under the influence of the decidedly “pretty” Lord Eko, some of the yokai (which the US translation refer to slightly inaccurately as “demons”) have been integrating themselves with modern technology to become “mikura,” preying on humankind from the shadows in preparation for a diabolical scheme to render Shinjuku into a… demon city!

Clearly, now that the “demons” are made of metal (and robots are strong), wooden sticks infused with the power of Nempo chi can no longer save the day. Our hero is going to need more ninja-like offense courtesy of an oversized nodachi-like sword, plus a suit of armor enabling him to transform into not just a missile-firing car, but ALSO a cannon-equipped jet plane! That is the being known as Karas. The Japanese pronounce that as “karasu,” which means something like “crow” or “raven” in Japanese, hence the all-black, bird-like look of the armor. The gesticulating arm movements accompanying its transformation along with a particular flying kick signature attack are certainly Kamen Rider-influenced, but to say more about the inner workings of our hero Otoha and his Karas suit—what powers it, how it came to exist, and why an emotionless catgirl child is always hanging out nearby—would reveal too much.

Any similarities to the American “dark hero” The Crow (would “Hot Topic hero” be more apropos for him?) are probably NOT coincidental, but you’re not supposed to know the details right away. It may seem murky at first, but as the episodes progress and Karas crosses paths with supernatural allies and enemies, it becomes clear. The trouble is… the majority of US fans didn’t stick around to realize this. Ask anime fans their thoughts on the Karas anime, and the predominant response you’ll get aside from “I never watched that” will be “it looks cool, but the story is utterly incomprehensible.” To be fair, it’s not their fault for thinking that. That lies squarely at the feet of Manga Video. 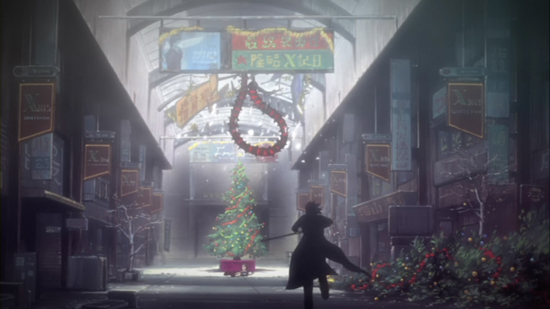 The animation of Karas is a lavish fusion of 2D and 3D CG animation, with 6.1 audio channel soundtracks created for both the English and Japanese alike. I always found it fascinating that Japan continues to use 2-channel stereo as their default on the grounds that “people in Japan don’t have room for multi-channel setups and don’t want to bother their neighbors even if they do.” Visually and aurally Karas is a step up from the norm, and this level of quality doesn’t happen overnight. For this and other reasons, there was a nearly two-year delay between the release of the first three episodes and the final three such that the final episode wasn’t released until 2007. And you thought the wait for Gundam Unicorn was bad! Manga Video, having staked their success upon selling movies and short OVA series to casual viewing audiences that lack the inclination to watch longer TV series, opted to present those first three episodes of Karas as though they were a standalone feature film. To accomplish this, they cut out the opening and ending credits from each episode and titled the result Karas: The Prophecy. They hired a few minor Hollywood celebrities to play supporting characters and gave them top billing on the box, which had reviewer quotes on it stating that Karas was “like Batman Begins,” which had just been released. Their efforts made Karas: The Prophecy one of the top-selling anime DVDs in America for 2006…

… and it backfired horribly. Putting aside the fact that Karas isn’t like Batman Begins in any of the ways a typical viewer would evaluate that statement—the Blade films as well as the aforementioned The Crow are much closer in tone—an audience’s expectations for the narrative structure of a movie, even one meant to be part of a greater story, is quite different from that of seeing the first few episodes of a continuing series. Think of it this way: imagine if someone just presented the first four episodes of Baccano! as if it were its own feature film, and then gave no indication that there was any more after that such that what came later would explain what happened before. You’d conclude “man, this anime is nonsense,” right? But that’s precisely what happened here. There were no indications that Karas was originally a series or that additional episodes would follow, so the fact that little is explained in the first half got interpreted as “stuff just happens and nothing is resolved whatsoever.” To mitigate this, Tatsunoko commissioned Dark Horse Comics to create a one-shot miniature comic dedicated solely to explaining the premise of the story. “Cross-media” narratives were being explored by the entertainment industry at the time (The Matrix, the Star Wars prequels), but they largely proved unviable since it turns out that it’s just asking too much of average consumers if you have to read the back cover of the DVD along with what is effectively an illustrated fanfic just to “get” the movie you’re watching. 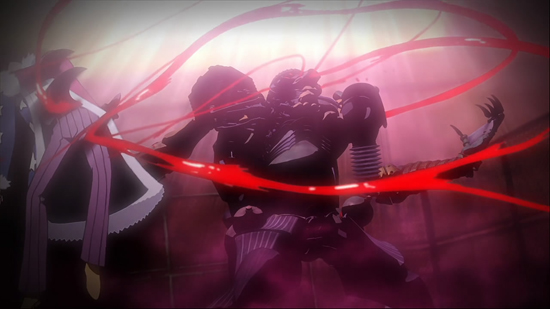 It was a full year and a half until the final three episodes were released in similarly edited fashion as Karas: The Revelation, and by then nobody cared anymore; the series had been panned by general audiences and recommended with reservations even by tokusatsu fans. Despite Karas: The Prophecy being one of the best-selling anime titles of 2006, Karas: The Revelation didn’t even generate a blip on the radar. That’s too bad, because the final three episodes are where the violence and catastrophic devastation levels rocket up dramatically, as if it were a serious, R-rated Transformers: Dark of the Moon. Now THAT’s what they should put on the box cover if they REALLY wanted to appeal to casual audiences while driving the hardcore crowd far, far away!

Nowadays, all six episodes are sold in one set as Karas: The Complete Collection, but they’re still just the two “movies” sold in one bundle, and without the original openings and endings I question the merits of calling it “complete.” Still, used as well as unsold new copies are plentiful, and the entire thing can be found without much difficulty for under $10. That’s certainly a fair price to pay for something as action-packed and special effects-heavy as this. My main regret aside from the editing issue is that the CG effects are clearly created with high-definition viewing in mind, and no uncut Blu-Ray has ever been released in the US like it was in Japan. For the tokusatsu fans, particularly those who like the more serious, violent take on heroes that GARO offers, Karas is cut along very similar lines. It’ll be a little while yet before we get further installments of Tiger and Bunny, but for fans of that series who have already seen The Big O, are curious to see what the staff of both titles did in the interim, and wish the camera didn’t cut away whenever Lunatic was getting down to business, I say give Karas a shot. It certainly won’t take long. 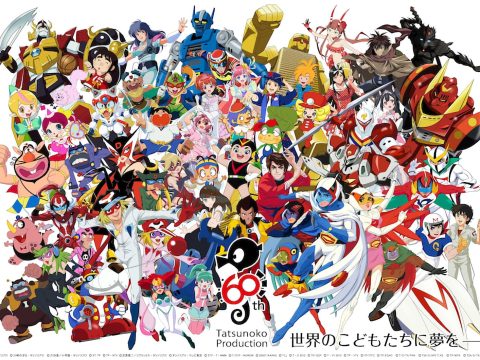 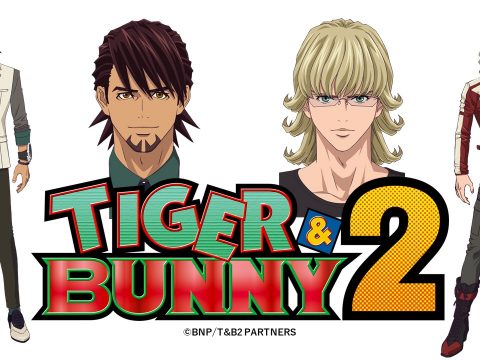