And you thought there is never a girl online? Manga to End This Month 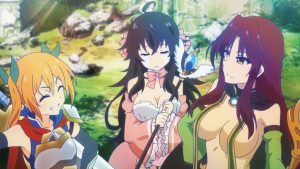 Kazui Ishigami’s And you never thought there is a girl online? manga—which adapts the light novel series by Shibai Kineko—is about to come to an end. According to the latest issue of Dengeki G’s Comic magazine, the series will officially conclude in the following issue, which hits stands in Japan on September 29.

The original light novel series kicked off its run back in 2013, and Ishigami’s manga adaptation followed in 2014, just a couple years before the 2016 anime adaptation. Both Funimation and Crunchyroll stream the anime, and the latter describes it like so:

After Hideki Nishimura confesses to a girl online, he is shocked when she turns out to be a boy. Traumatized, he swears to never trust any “girl” players. That is, until one confesses to him! Ako Tamaki is a beautiful loner who has trouble differentiating between what’s reality and the online world she spends so much of her time in. Can Hideki and his guild friends help fix socially inept Ako?